Realistic Games Takes Players into the Bank of the Nile 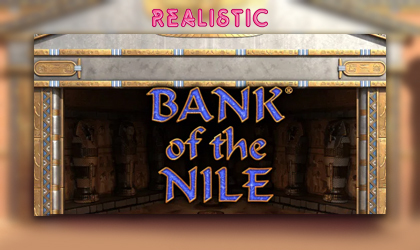 Realistic Games, an innovative member of the iGaming industry, is taking players into the depths of Ancient Egypt with its latest release.

Titled Bank of the Nile, this new game…

...can potentially bring all kinds of prizes to those who are lucky enough to trigger one of its awesome features.

The Tomb of the Pharaohs:

The developer is dropping this release in time for the hot summer days ahead. Namely, this popular company is taking players on a brand-new adventure to the realms of Ancient Egypt.

The whole game is focused around the…

…treasures hidden by the ancient pharaohs. Players are encouraged to explore the Nile in search of these treasures, which can potentially bring them plenty of awesome rewards!

As far as aesthetics go, the developer did a great job…

…depicting the architecture of Ancient Egypt. The reels are surrounded by highly detailed walls covered with hieroglyphs. Symbol designs follow a similar pattern with its highly detailed icons in the higher-paying tier. On the other hand, the lower-paying tier is all about providing a good contrast with the colorful card royal symbols.

The 5x3 grid slot game runs on 20 fixed paylines. It also contains an exciting set of special features aimed at bringing the whole experience to a new level. Players can look forward to Flaming Wilds, which are randomly triggered and turn the base game into a potentially lucrative mini-game. Then there’s the star of the occasion – the Tomb Bonus Spin mode.

This part of the game allows players to choose between various bonus spin modes, each offering a different selection of prizes and features.

Robert Lee, Commercial Director for the provider, said: “Bank of the Nile offers an engaging bonus round for the players and we are thrilled to further boost our exclusivity deal with Microgaming by offering its customers first access to this Egyptian-themed title before the network launch. The game’s bonus round is designed to ramp up the excitement factor and provide players with a twist on a classic theme that has proven appeal among varied audiences.”

Realistic is one of the veterans of the iGaming industry. The company was founded back in 2002 and has since been building quality gaming content for various regulated markets around the world. It currently runs a massive portfolio of slots and other products that can be found among the portfolios of numerous tier-one online casino operators out there. With a talented team leading the brand forward, it continues to make ambitious plans for the future!