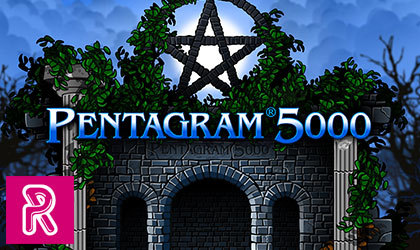 Realistic Games has a bunch of awesome slots within their portfolio.

That being said, their Pentagram series represents some of the best titles this provider has to offer…

Fans of the series are in for a treat as Realistic just dropped another sequel titled Pentagram 5000.

The latest addition to the portfolio builds on the already familiar layout, adding innovative features and visuals.

Speaking of which, the team behind this game went with a cartoon style…

…theme that takes place in what appears to be an overgrown Greco-Roman temple. The combination of roughly cut stones and overgrown foliage adds a dose of mystery to this release.

However, most of the visual…

…goodies are found on the reels themselves. The new release is what you could describe as a classic slot with a modern look. The team behind this game went with classic slot iconography.

Namely, players will find all kinds of fruits on the reels, in addition to several…

…specialized symbols such as the pentagram.

One part of this slot’s classic vibe is its 3x3 layout. There are 5 paylines in total, which is more than enough to land several attractive prizes.

As far as special features go, the supplier went with…

…a limited but exciting selection. There is a bonus round that is triggered when PENT, STAR, and GRAM symbols appear on any win line.

Those lucky enough to trigger this feature can look forward to 10 bonus spins as well as a 1x bet multiplier that progressively increases with each winning spin.

If the Pentagram symbol lands on the middle reel, there’s an opportunity for massive wins! Namely, this symbol will double the bonus spin total, allowing players to potentially reach this title’s max win amount of 5000x the original bet!

Robert Lee, Commercial Director for the provider, said: “Pentagram 5000 is a landmark addition to our slot offering and reflects a general trend to offer games with a higher return to player, attracting both casual slot fans and casino enthusiasts. Years after release, the original Pentagram is still a player favorite, and we expect that the simple gameplay and rewarding bonus round in the sequel will prove to be equally popular with players.”

About the Software Brand:

Realistic Games is a prominent software provider that is known for delivering exciting and innovative content for the iGaming industry. The company was founded back in 2002 and has since built a reputation of a formidable partner and provider. With a distribution network that spans across different continents, it is a truly global software studio.