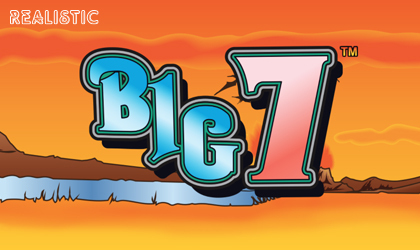 Leading casino content developer, Realistic Games has launched Electrocoin's classic BIG 7 for the online public. Based on the popular 3-reel layout, which recreates a retro look and playability of the original, delivering 3 different profiles to select at the start that determines the maximum payout.

By playing the jackpot x90, x120 or x150, players can win in multiple rounds. These include Extra Spin and Hold Win, which provide additional prizes. Each win goes to the Collect Bank screen, and at the end the whole sum is credited to the player's balance. Those who lose can be rewarded at the end of any losing spin to give players a better possibility of triggering a win combination.

Commercial Director at Realistic Games, Robert Lee said: “Big 7 is a favourite in the land-based world and it’s great to be able to enhance the title’s longevity by making it available to play online. Our Electrocoin series is continuing to perform strongly, not only attracting fans of traditional slots but new audiences too. With a similar gameplay to Bar-X™ but with a few added twists, Big 7 is set to be another big hit with players.”

Gabino Stergides, President of Electrocoin, added: “Realistic have pulled it out of the bag once again with this latest Electrocoin online adaption , proving they were the natural partner with which to collaborate. Their attention to detail when recreating the land-based experience for online is what makes games like Big 7 stand out. We’re delighted with the outcome and look forward to seeing how the release is received.”

Realistic is an award-winning provider that has been around since 2002. Since then, the firm has been known for creating entertaining online casino games worldwide. A couple of the biggest casino platforms in the United Kingdom and other parts of the world have started using the brand for their products. In the early days, the supplier focused on making a little collection of games for its customers.

In 2008, the group continued to develop a lobby. One the most popular games developed by this company are table games such as Shuffle Bots. The company also delivers slots with 5 and 3 reels.