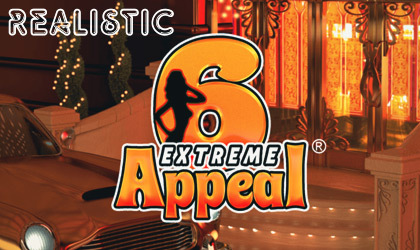 Realistic Games, an online casino provider, launched online slot 6 Appeal Extreme. The players who prefer dice, roulette games, or cards, will probably love the theme. The main symbol is the star which acts as a Wild and is the most valuable symbol. Blue and Red Dice are scatters and there are other symbols including a roulette wheel, a blonde woman, cocktails, and classic card symbols 10, J, Q, K and A. Players can enjoy the game from any device.

The action takes place on 5 reels, 3 rows, and 20 active paylines. The RTP is 96.33%. The maximum potential win is 6666x the bet, while the minimum betting option is $0.2 and the maximum is $10. The main features in addition to wilds and scatters include extra spins and a bonus buy feature.

This slot is the latest game in the Realistic library and showcases the developer’s ability to reinvent classic games that different kinds of players will appreciate.

Realistic’s Commercial Director, Robert Lee, said: “The original was such a success that we were always confident a refreshed version would work equally as well. Its timeless gameplay is the perfect fit for the new features, which we’re sure will bring in a new generation of players while gaining approval from its long-time fans.”

Realistic Games is an award-winning casino brand that has been in the casino industry for nearly two decades. Since 2002, when the company was founded, it has been recognized for creating entertaining online casino games around the world. Some of the largest casino brands in the UK and other parts of the world have started using realistic game titles on their platforms. At first, it focused on creating a small collection of games for its clients. In 2008, the group significantly expanded its presence and expanded its gaming lobby. Some of the most popular games developed by this company include Rainbow Magic, Clockwork Mice, Symmetry, and Black Ice.