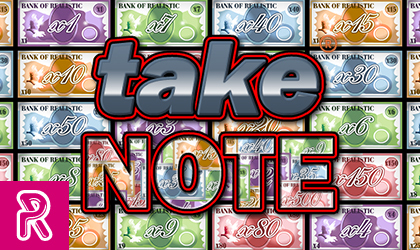 This is the third Realistic Games slot with classic graphics and settings called Take Note. The developers have chosen a look that will really remind players of land-based slots and they included many similar symbols from the old slots. Maybe the images are not that appealing, but there are other things that will attract most of the players.

The title has 3 reels, 3 rows and 5 active paylines with a maximum potential win of a 1000x the bet, which on these slots is pretty good, particularly since the game has an RTP of 96.15% and medium volatility. Wager-wise, players have at their disposal a wide betting range which starts from the minimum bet of $0.05 and goes up to the maximum betting option of $200. Thanks to the main bonus feature of the game which gives 1000x the stake, players will have a decent payout and with the fact that brings the player an above-average RTP, which means that in the long run, this is true for those who are trying and are more patient.

Commercial Director at Realistic Games, Robert Lee said: “Take Note is a classic Realistic Games title – familiar to our loyal fans but offering plenty of engagement to attract the new generation of players. The five shots at winning big in the bonus round build anticipation on every offer, making this a slot which is sure to perform strongly for our operator partners.”

Realistic Games is an award-winning provider that has been active in the gambling world since 2002. Since then, the company has been well-known for developing entertaining and immersive casino games around the world. Some of the largest casino platforms in the United Kingdom and other parts of the world have been using Realistic Games and integrating them on their platforms. Initially, the supplier is aimed at building a small collection of games for its clients. In 2008, the company continued to develop the gaming portfolio and one of the most popular products, besides slots, developed by this company are table games like Shuffle Bots.