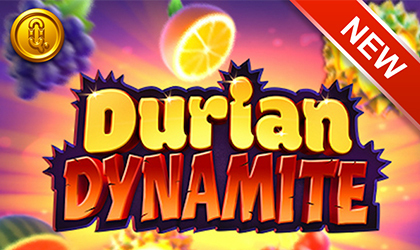 The gaming industry is filled with classic fruit slot machines and it is safe to say that these types of games are the most common.

Still, one of the most creative slot specialists, based in Sweden, Quickspin, has found a way to jam things up by adding something interesting to this ordinary slot design.

What Did They Do?

To be specific, Quickspin has developed a game that comes with 3D graphics, as well as eye-catching features and highly volatile gameplay, all in their latest release titled, Durian Dynamite.

Furthermore, this is their fourth slot in 2019 (the last one was The Grand) and they took a simple fruit theme to a whole new level with its design and features.

Tell Me About the Symbols:

It may seem like they’ve inserted traditional characters, such as cherries, plums, watermelons and other kinds of frequently-seen symbols, but not this time.

Namely, the main icon in this unique game is the ancient, and smelly Durian fruit. For those of you who have never heard of it, it is the smelliest fruit in the world, however, in this reel slot, it will invite you to taste it by simply using the spin button; and it might prove highly beneficial!

What must be once again praised is the graphics.

Besides its design, the game is equipped with a lot of thrilling and engaging features, such as a middle reel which spits a symbol that can explode out of the blue and multiply all across the screen.

That is something we haven’t seen before and surely a great addition to this game! Another one that spices things up is the Bonus Picker that will keep players on the edge of their seats by bestowing them with three to six random enhancements for the casino spins bonus game.

If by any chance gamers successfully grab up to thirty-six bonus spins, they will automatically increase the amount of active reels or even receive additional weapons to help them utilize the Dynamite Wild Feature.

“Durian Dynamite is guaranteed to give players a thrilling gaming experience! The Bonus Picker is a feature that proved to be extremely popular in our hit game Eastern Emeralds, which was nominated for an EGR ‘Game of the Year Award’ last year. The feature that we’ve used in Durian Dynamite is slightly different, but it adds just as much fun and excitement to the game.”