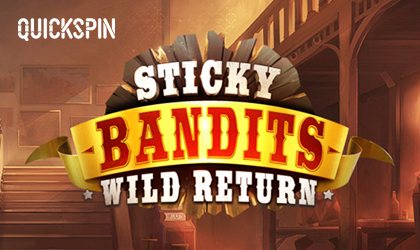 Quickspin has announced the release of a new slot game set in the Wild West. Fans of this company will recognize the main characters of this new adventure as this is their second one!

The studio behind this release has introduced a brand-new character this time around, promising to make this ride a wild one!

The game brings a lot of the same features that have made the original so popular in the first place. However, it is likely that…

…the new additions are what gives this new game the most value. All of the features, old and new, are packed neatly in a compelling theme. The overall aesthetic has a strong western vibe with cacti, barren lands, and bison skulls all over.

The symbol design is at the same level of quality as before, if not better. Quickspin is known for delivering compelling graphics, and that is exactly the case with this title! Under the hood…

…players can find a polished out base game that is packed with special features.

This is a 5x4 slot that utilizes 40 paylines. In terms of Return to Player value, the developer claims a value of 96.22%.

Erik Gullstrand, Chief Product Officer at Quickspin, provided insight into what players can expect: “The first Sticky Bandits is one of the classics in our portfolio – it’s really popular with the team at Quickspin, and it also happens to be one of our top-performing slots. So, one day the team got talking about it and we wondered what it would be like to do a follow up with the same bandits and what that might look like. What if the bandits were much older, and the game a bit tougher and rawer? And the symbols massive? Once we started working on it, we decided to add a female bandit to the gang as well. We wanted this game to be bigger and bolder in every way, so we’ve also incorporated a shootout where the bandits turn into Sticky Wilds.”

The brand behind titles such as Dragon Chase and others has created a lot of hype with this slot. With that said…

…it will be available in all affiliated online casinos beginning August 13, 2019.

Quickspin is a Swedish-based software provider that offers some of the highest quality titles in the industry. The studio boasts a large number of awards…

…which speak volumes about its reputation. The team is always looking to push the boundaries of gameplay and features, offering its users innovative game mechanics. So far, they have been successful…

…in staying on the cutting-edge of the industry. Always looking for new partners, Quickspin is expanding its horizons and acquiring new user pools all around the world.