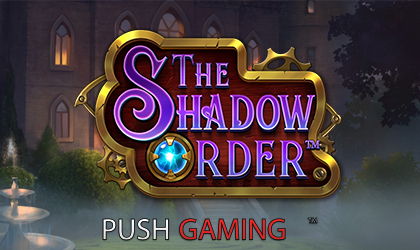 Push Gaming’s new title, The Shadow Order, has been set to be released soon. The software studio behind the new game has prepared a sneak peek teaser package meant to give an idea of what the game is about and what players can expect to see upon release.

As it turns out, the release teaser offers much more than just the basics. Whether on purpose or by accident, the developer has spilled the beans on this title.

Even before it hits online casinos, The Shadow Order is piquing interest among players thanks to its mysterious theme. Secret societies and ancient orders have always been intriguing subjects. After all, everyone wants to know what goes on in the shadows.

Speaking of which, the theme of this game is all about unearthing these secrets, hence the name. The atmosphere of the game follows the theme perfectly. Everything from the smallest details to the background design alludes to something nefarious lurking just out of sight.

The base game is much less mysterious. This UK and Malta-based company is known for delivering rock-solid solutions and interesting special features.

The new title sports a 5x5 grid with cascading reels. This translates to a much more interesting gaming experience as cascading symbols could mean that another win is inbound.

Every time players score a win, orb symbols located right above the grid get charged. When all three orbs are maxed out, the orb will fall onto the top row in the grid and turn everything in it into wild symbols.

Another interesting feature is the in-game characters. There are four and each one has special powers. Level 1 character is Molly The Messenger. Level 2 unlocks Billy The Gambler, while levels 3 and 4 unlock Archie The Spy and Amarillo The Magister respectively. On top of everything mentioned so far, there is also the free games feature that awards the player with five extra spins.

This online slot is likely to appeal to a broad audience considering its moderately volatile RTP of 96.98%.

The current release date is set for August. Once it hits the shelves, The Shadow Order will be available at partnered casinos on both desktop and mobile platforms.

Founded in 2010, Push Gaming was formed with the intention of taking land-based games and integrating them into online environments. Not long afterward, the company releases its first title in 2012 and forms strategic partnerships with some of the largest names in the business.

Since then, its team has grown and taken on more challenging tasks. Today, the company is among top-tier studios operating on a variety of different markets. Their titles are sought after and always highly polished.

With a steady rate of growth, the company is looking to expand its reach into newly regulated spaces and online environments that are popping up all around the world.

Get Ready for Blazing Gambling Action with Big Max 77 Slot