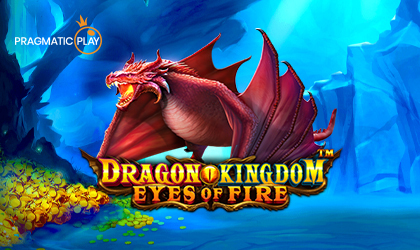 The action of this slot machine takes place in the cave of a giant dragon, and at the bottom of the reels, players will see a large amount of gold that teases even the most superstitious players. Dragon Kingdom Eyes of Fire is played on 3 reels, 3 rows and it has 5 active paylines, but players can get another extra reel with great features included. The lower paying symbols are spades, clubs, tambourines and hearts in gorgeously colored crystals. Mid-paying symbols consist of a hot lucky seven and two giant dragons colored in red and blue. The highest-paid symbol is the Wild in the game with the dragon's eye symbol.

The betting range starts from $0.05 and goes up to $25 per bet. The volatility in the game foes from low to medium, while the maximum potential win is 1250x the bet. The title has above the average RTP of 96.49%, and this fact will attract the attention of the punters. Pragmatic Play is incredibly skilled at creating slots and the game is playable on all devices as well.

Yossi Barzely, Chief Business Development Officer at Pragmatic, commented: “Blast away the winter cold with a lucrative journey to experience the Kingdom’s searing heat. The intuitive gameplay is boosted by a beautifully designed backdrop of caverns filled with gold – some of which the bravest adventurers can scoop from under the dragon’s nose. Dragon’s Kingdom – Eyes of Fire is red hot and sure to please operators and players alike.”

Pragmatic Play is an online casino games developer that does business under two different names. The brand continues to launch new games, and they have released over 125 titles of slots, all of them, like their latest release, works great on desktop and mobile technologies available in the market. The variety of games they offer surpasses many other developers. Its main products are slot machines, but its portfolio also includes video poker, keno and table games. The brand's content is available in over 80 countries and has been translated into 18 languages around the world, which is impressive and shows that it wants games to be available to everyone.