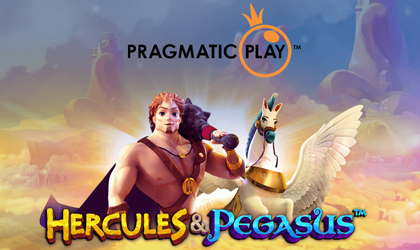 Pragmatic Play has announced the release of a brand-new slot game that puts players in the shoes of mythological heroes. Titled Hercules and Pegasus, the new game…

…is all about Greek mythology, awesome features and potentially lucrative winning spins. The studio behind this release has packed it to the brim with chances for players to hit it big.

Action Among the Clouds Above Olympus:

The brand’s latest title packs a truly impressive theme that is centered around two unusual yet close friends – Hercules and his buddy, Pegasus. The team behind this release opted to set the action up…

…high above the mountain Olympus, with a great view of the city of gods. Fans of Greek mythology will absolutely love the level of detail that went into the background as well as the symbol design. The view in the background is stunning.

Scenery appears to be static at first, but a closer look reveals a number of animated details which make the whole thing pretty lively. There are birds flying, a few clouds rolling in the foreground while their cousins in the background gently rock up and down.

Symbols are made to fit the story but also the design style of this slot. Namely, the developer went with the classic card royals for the lower paying deck while the higher paying one features a number of icons we usually associate with Greek mythology. This means harps, Parthenon-like temples and more.

The Treasures of the Gods:

The looks are not all the game has to offer. There is a lot hiding underneath all those cool graphics. The game runs on a 5x3 reel layout and the total of 20 fixed paylines. The brand has decided to…

…keep things relatively simple in terms of special features. However, that doesn’t mean that there’s only one. On the contrary, there’s a few bonus features that players will run into with a little bit of luck.

For starters, there are two types of wilds – the Hercules Wilds and Pegasus Wilds. Each of these brings unique features of their own such as bonus spins and multipliers. There are also the Bolts of Zeus symbols that have the potential to turn into regular wilds.

Pragmatic is a game development studio that delivers quality content for the iGaming industry. Although the team behind this brand is best known for its oftentimes immersive slot games, it offers a number of other games such as Bingo and Live Casino services.

This company is currently one of the more popular providers in the industry with an established presence in many competitive markets.