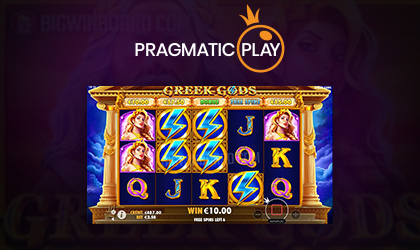 The game has an average return to player rate of 96.5%. The 3x5 configuration…

…is accompanied by 243 paylines, plus a wild and scatter symbol that perform their usual magic (the former replaces all except Scatter and the latter triggers extra rounds).

The very looks of the game are inspired by Greek temples – that’s the backdrop for this title, as the reels are set under the roof of a temple with columns on both sides.

The music of this slot is quite dramatic and provides more oomph to the gameplay which is quite fast and dynamic. Zeus and Hera, two top deities, are the main symbols in this game – Zeus pays six times the stake for five of a kind, while other valuable symbols are an urn, a goblet and kind of 10.

The betting range is from 25 cents to 125 USD or EUR per spin… …while Quick Spin and Turbo Spin options accelerate the rotations to player’s liking.

Random Awards will pop out an extra reel above the reels that contain random rewards that change with every spin. The max cash outcome may come to be 50 times the stake, extra spins or a Wheel of Fortune minigame.

The Wheel of Fortune itself can yield wins that are ten to a THOUSAND times the stake. Players can win more than one Wheel of Fortune on a single spin and in that case, they will play consecutively one after the other.

In this game, scatter is represented in the form of a lightning bolt…

…and landing five or more on the single spin will trigger extra spins. They are awarded at a rate of 3 plus 1 for scatter, which means that there can be a maximum of 36 extra spins.