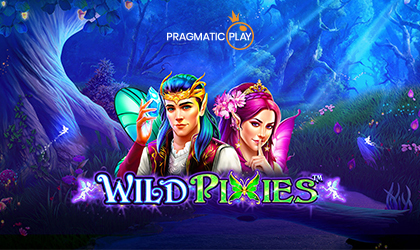 Who doesn’t like to play games where they get to come across enchanting places and creatures with even more magical features and graphics?

If you ask us, most of players are into these kinds of reel slots and so are we. The latest game by one of the most popular software providers is exactly what we described.

Pragmatic Play never ceases to amaze us with its endless imagination and capability of making sensational games.

The newest one in a slew is called, Wild Pixies, and it is a 3x5 video slot that consists of mesmerizing, multicolored denizens of the bewitching woodland.

As you have probably assumed it is placed inside of wondrous woods and it offers a plethora of captivating symbols such as a precious diamond which plays the part of the scatter symbol, along with a magic butterfly that represents the wild icon.

Both of these signs are extremely beneficial, especially the scatter which can help players unlock several sensational wins!

How To Unlock Them?

It can be done if gamers land more than three diamonds at the same time. If they succeed, they will automatically activate the roaming wilds casino spins feature!

Once this occurs, they will be transported into a magical clearing in the pixies forest, where they can freely explore (and collect if they find them) various riches of these interesting creatures.

“Wild Pixies is a fun-filled, magical slot experience, and one we are thrilled to release. With its immersive gameplay and enchanting bonus feature, we are confident Wild Pixies will be a hit.”

Furthermore, this game is the latest hit from Pragmatic Play and it is a superb addition to their splendid portfolio.

Moreover, it follows the release of Extra Juicy, accompanied by some of their most popular games like Mustang Gold, Da Vinci’s Treasure and Wolf Gold.

Besides developing high-quality games, they are also devoted to making dealerships with some of the most prosperous companies in the gaming industry, including its latest agreement with LeoVegas.

For instance, in the last twelve months, they have successfully entered some of the most reputable regulated markets by making various agreements with several outstanding operators, such as Casumo, PokerStars and Kindred Group.

Whenever they release a video slot, it almost instantly becomes a huge hit among both players and operators and we hope that this will be the case with Wild Pixies too!