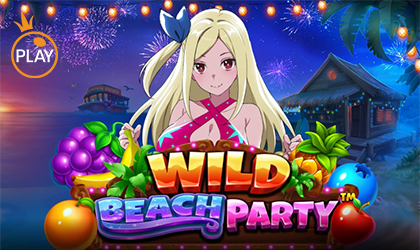 Wild Beach Party is a new slot from Pragmatic Play that takes players on an adventure to the most peaceful place across the globe: a Caribbean paradise island. The title clearly describes what can happen during gameplay because there are wild symbols that can bring punters massive wins! In the background, trees are swaying while music is played by bamboo flutes and drums, bringing you all the right vibes for this beach party!

There are 7 reels, and 7 rows and winning combinations are formed with a cluster pays mechanic. This is a high volatility game where up to 5,000x the bet can be won. The RTP is 96.53%, which is above the industry average. You can play anywhere between $0.20 and $100 per spin while there will be many bonus features that can be activated along the way, including a tumble feature, multipliers, scatters, wilds, and extra spins.

Enjoy the Sun and Surf with Big Payouts:

The debut of Wild Beach Party comes after the recently launched Queenie, Snakes and Ladders Megadice, and Extra Juicy Megaways, which are all part of Pragmatic's award-winning games portfolio.

In 2013, Pragmatic was founded, and has since contributed to over 100 gaming sites across the world. One important part of its business plan has been cooperation with top companies like Novomatic or Greentube. Initially, the company was focused on the Asian market, but as the business grew, moved and opened offices in the UK. It now has over 300 slots in its library with innovative themes that are compatible with any internet-connected device. Over the years, the supplier has received several awards for its efforts in the iGaming industry and its most popular casino games are Hot Safari, Magic Crystals, Wild Sevens, Mighty Kong, The Catfather, and recently released titles such as Wolf Gold, John Hunter, and the Tomb of the Scarab Queen. Today, it is known as a trusted brand operating under numerous licenses issued by reputable gaming authorities.