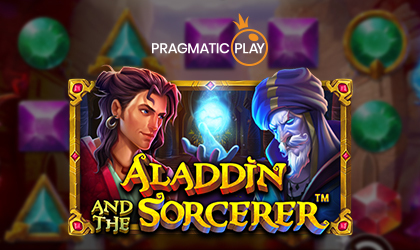 Pragmatic Play, a highly revered slot specialist, has released a brand-new game that brings new standards of graphical design to the reels.

Centered around the story of Aladdin, this release introduces a different take on this age-old legend. Fans of Aladdin will find this rendition of the story interesting, to say the least.

The developer has always been known to add their own spin on different stories. This time around, they have taken an age-old tale and turned it into a thrilling adventure. What sets this slot from just about any other out there are the graphics. The team behind the release has gone above and beyond when it comes to visuals. So much so that the game…

…feels like a proper AAA release. Once fired up, players will be presented with a suspenseful scene. Namely, the scene takes place in a massive temple with Aladdin on one side and the Magician on the other, sizing each other up.

Although already quite impressive, things get even better when the fact that everything is animated is added into the equation. The visuals in this game are stunning to say the least.

At the core of this release lies a standard 5x3 reel grid that runs on 20 fixed paylines. Despite being rather resource-intensive, the game runs very smooth on all platforms.

As far as special features go don’t expect anything too crazy in terms of added features. On the contrary, they have decided to use a combination of bonus spin modes and different wilds to…

…ensure potentially lucrative wins. However, said spin mode doesn’t bring the usual experience. Rather it depicts the battle between Aladdin and the Sorcerer. If Aladdin comes out the winner, the game moves up to the second level of the bonus spin game.

Aside from being awarded future bonus spins, players who reach this far will also find that all wild symbols in this mode come with x2 multipliers attached as standard.

Melissa Summerfield, Chief Commercial Officer at Pragmatic, offered her take on the release: “Aladdin and the SorcererTM is an enchanting new addition to our best-in-class slot portfolio. The action-packed title boasts exciting features, an immersive storyline and massive payouts, giving players a shot at their own fairytale ending.”

Pragmatic Play is one of the premier software providers in the iGaming industry. Specializing in delivering cinematic slots that boast high levels of graphics quality, this studio has amassed a large number of fans who appreciate the visuals. However, their games are not only impressive in terms of design, but they also bring solid features and core game experience to the table.

This company’s ability to produce quality slots in a rather short timeframe has made them a wanted partner in the industry.