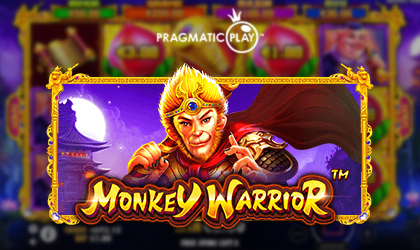 Pragmatic Play, one of the most active software providers this year, has announced the release of yet another game. Titled Monkey Warrior, this all slot takes you on an adventure featuring Wu Kong as the main lead.

This new title is the latest of the several that were released quite recently by the brand. Since most of those previous games have received positive critiques, this latest addition to their ever-expanding portfolio is most likely going to achieve similar results.

On The Journey to The West:

Wu Kong or Sun Wukong is by far one of the most popular and legends to come out of China. Wukong has made the first appearance in a classical Chinese novel from the 16th century.

However, the myth of the warrior monkey goes back to 700 BC in ancient China. Pragmatic is not the first studio to take inspiration from this story. However, they are well known for their high-end slots and this one promises to be exactly that. Since the game was announced well in advance, one of the most hyped aspects of this title was the theme. Fans of WuKong and his adventures were interested in seeing how the character was going to be depicted. So far the reports confirm what many have known long before Warrior Monkey ever became public – Pragmatic went all out with the visuals.

As far as online slots go, this company is one of the few that does high-level animations and highly detailed character design. This alone has allowed them to grow a massive audience and a loyal fan base.

“We are delighted to reveal Monkey Warrior, our latest blockbuster slot.”

The success of many of the company's games can be attributed to what goes on under the hood. This company takes pride in its software solutions, especially since they offer multi-platform support to its customers. This new title runs on a known base game that has been used before. As such, it offers a familiar sense of consistency and reliability most online casinos appreciate.

Summerfield commented on this, saying:

“With its smooth gameplay and incredibly detailed setting, we look forward to our fans getting a chance to join Wu Kong on his journey.”

We are left to see how the game will fare on what has ended up being a highly contested market in Q4 or 2019.

Pragmatic is a company with a long history of delivering quality content to their clients. Their portfolio is among the strongest available in the industry. Aside from offering great online slot games, this software provider is known for its custom API as well. This has allowed them to quickly blend into their customer’s existing infrastructure and go live in a short timeframe. The developer is also one of the most vocal proponents of responsible gambling and transparent business practices.