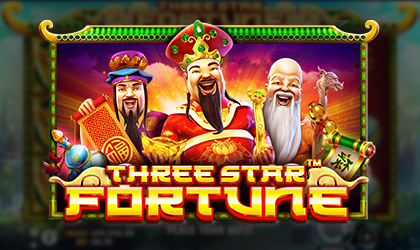 Pragmatic Play, one of the leading software providers in the iGaming industry, has announced the launch of a brand-new, Asian-themed slot game titled Three Star Fortune.

The game is all about the classic vibe often associated with eastern themes, giving players a solid chance to potentially score big!

The Gods of Fortune:

The developer’s diverse list of releases for this year includes all kinds of slots. Naturally, at least one of them has to be about ancient Chinese gods or some similar thematic.

This latest title is…

…all about satisfying everyone’s desire for a game of this type. As soon as the slot loads, players are presented with one of those signature Chinese countryside landscapes, complete with towering mountains, distant monasteries, and everything.

The cool thing about the background is that it’s animated. The team behind the game has gone a step above and beyond to animate the background with moving clouds, falling leaves, and waterfalls running in the distance. That being said, symbol design is arguably what gives this game its color. The brand went with Chinese characters for the lower-paying tier while the higher paying tier is all about various traditional Chinese objects. Overall, the aesthetics are spot on if you’re a fan of this type of theme.

The 5x3 game runs on 10 fixed paylines. The game is fairly potent on its own, which is a good thing considering that it offers limited special features.

Most slots of this genre…

…are generally conservative feature-wise and this one is no different. Players can look forward to things such as expanding wilds that can cover entire reels. There are three different wilds representing each of the three deities.

In addition to this feature, there is also the bonus spin mode that can spice things up even further!

Melissa Summerfield, Chief Commercial Officer for the developer, said: “Three Star Fortune is undoubtedly a valuable addition to our slot portfolio. With a highly appreciated theme, Expanding Wilds and massive win potential, players will be keeping a keen eye out for the ancient Gods of Wealth bringing their riches to the reels.”

Pragmatic is one of the cornerstone brands in the iGaming industry. Known for its high-quality slot games and other gaming content, the company has earned a place at the very top of the ladder.

The team behind this brand has worked hard to meticulously build its reputation. As a result, this company now has partners in all corners of the world where there are regulated markets. Working with the developer gives operators access to a massive portfolio of immersive and innovative slot games.