Pragmatic Play Goes on a Multiplier Frenzy in Jungle Gorilla 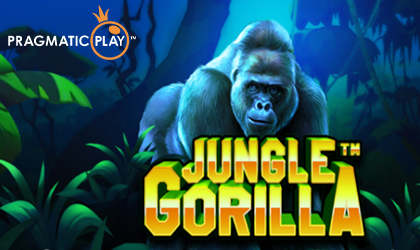 Pragmatic Play is dropping another hot title this year under the name of Jungle Gorilla.

…while it’s also packed with super tempting features. Players can expect to hit mad multipliers and potentially score it big!

The King of the Jungle:

…wrapped into an awesome theme. As the game loads up, players are presented with a view of the jungle from its core. The triple canopy is barely letting any light through, giving the whole scene a green glow.

As per usual, the provider has…

…animated most of the background, making this a rather immersive slot. This immersion continues on the reels themselves. The developing team has done a great job of creating a set of symbols that perfectly matches the theme.

In the lower-paying tier, we have the usual card royals done in the style of moss-covered stone. The higher paying tier comes in the form of various animals, including lizards, elephants, and more!

Of course, the highest paying symbol is that of a Gorilla. A gorilla is also found on the scatter symbol.

The game is based on your average 5x3 reel grid that runs on 20 fixed paylines. The estimated RTP is 96.57%, which places it right in the average zone.

However, it’s the special features…

…that make it stand out. To be more specific, there are no common special features as we know them. Instead, there’s the multiplier mechanic that works as follows.

Every time a scatter symbol…

…is dropped on the reels, that reel gains a 1x multiplier for a max value of 5x. When you drop a wild on as a part of the win, that wild will borrow the multiplier from the reel.

Melissa Summerfield, Chief Commercial Officer for the provider, said: “Jungle Gorilla is a thrill ride that takes players on an African adventure packed with features and huge prizes. The addition of its reel-based multiplier makes every spin a journey, and we’re delighted to be adding this immersive title to our pioneering portfolio.”

Pragmatic is a popular software provider that is among the top tier names in the industry. This company is known for its niche slots as well as games that feature high levels of graphical quality. Its team is working hard on making games that push the boundaries of entertainment and technology.