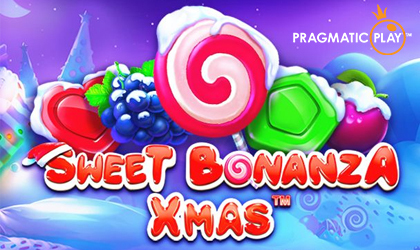 Pragmatic Play is the latest software provider to announce the release of a holiday-inspired slot game. Titled Sweet Bonanza Xmas, the new game…

…is bringing holiday joy to the reels! The game is all about the core symbology that makes the Christmas season.

This latest title is all about the holiday spirit. The company has decided to take every symbol of this festive period and distill it into a single slot game. Players who decide to give it a go will be greeted with borderline magical scenery as the game loads up.

The team tasked with the creative side of this release has created a truly magical environment. Everywhere you look, you’ll see snow, candy canes, sweets and Christmas decorations.

Out in the distance, the only thing disturbing a peaceful, evening skyline is a set of massive snowmen dressed up to the nines. Despite being a dominantly static background, the team has added…

…a few simple animations in all the right places that make the whole experience that much more immersive.

Symbol design follows the same idea. Players will find all kinds of treats on the reels. This is also one of those slots where it isn’t easy to separate higher and lower paying symbols. The developer decided to use sweets and treats for both tiers of symbols.

Once the sugar rush is gone, the game reveals an engaging core game mechanic. Namely, the studio went with a 6x5 grid while the symbols pay anywhere on the screen. The final win value is determined by the number of like symbols you draw. Aside from an exciting core game mechanic, there are also several interesting special features.

The supplier allows players to purchase bonus spins while they can also decide to bet 2.50 credits and double their chances to win. Furthermore, there’s the Ante Bet where players get to…

…select a bet multiplier. This can be 20x or 25x depending on the choice. Then there is the Tumble Feature that takes away winning symbols after a winning spin, replacing them with new symbols, much like cascading reels.

Melissa Summerfield, Chief Commercial Officer, said: “Our Christmas games have always been incredibly popular, and Sweet Bonanza Xmas is an exciting take on one of our most sought-after games. With its high volatility, and the chance of multipliers of up to 100x, we’re sure this slot is going to be a huge hit with operators and players alike.”

Pragmatic is a slot game specialist with a long track record of producing quality content for the iGaming industry. The company was founded in 2015, but it didn’t take them long…

…to become a true figure of authority in the industry. Currently, they offer various back end solutions in addition to a massive portfolio of cinematic slots.