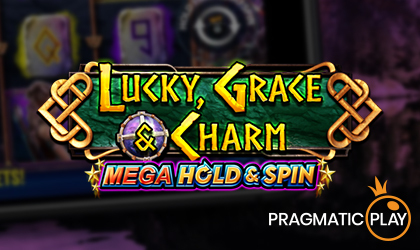 Pragmatic Play continues to strengthen its partnership with Reel Kingdom, and this time, the two have created an online slot with a combination old fashioned and more modern design. Now players are invited to try their luck in the online slot Lucky, Grace and Charm, to join 3 fantastic Viking warriors and to generate high payouts!

The grid is set in a magical place between two ships and there are 5 reels, 3 rows, and 10 active paylines. The RTP is 96.71%. This game promises a maximum potential win of 10,000x the bet, while the betting range is between a minimum of $0.1 and a maximum of $250. The game is packed with many bonus features, including wilds, scatters, bonus game, extra spins, re-spins, multipliers, and Mega Hold and Spin.

This title was created with more experienced players in mind. On the other hand, with the maximum potential win, a high RTP and many bonus features, players can expect plenty of fun and excitement, no matter their skill level!

Yossi Barzely, Pragmatic Play Chief Business Development Officer, said: “We’re back with another Norse-inspired adventure, only this time, it is three female warriors at the helm of the ship! Lucky, Grace & Charm is packed with huge multipliers, exciting features and a variety of bonus modes to keep players entertained, and we expect the title to fare exceptionally well with our audience.”

Pragmatic was established in 2013 and it created over 280 online casino games for players from all over the world. Over the years, it has grown rapidly, thanks to its relationship with leading brands such as Novomatic and Greentube. It was initially focused on the Asian market, but in early 2015, it moved to the United Kingdom and opened offices in London. It now has over 200 cutting-edge slots that are backed with HTML 5 technology, which means its games are compatible across platforms and devices, including iOS, Android, and Windows. It has developed many games including Wild Sevens, Magic Crystals, Hot Safari, The Catfather, and many others. It is among respected, trusted providers, and operates under licenses issued by Malta Gambling Authority and the United Kingdom.

BGaming Adds to its Portfolio of Games Dragons Gold 100