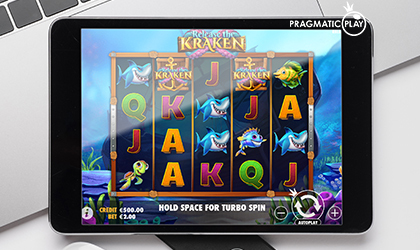 Pragmatic Play, one of the premier slot game providers in the industry, has announced the release of a brand-new slot game titled, Release the Kraken. Set in the depths of the ocean…

…the new game takes players on a wild journey full of thrilling moments and dangerous encounters with underwater Monsters.

Monsters that Lurk Beneath the Surface:

This latest addition to the developer’s slot portfolio comes in the form of an exciting adventure. Namely, the creative team behind this brand has…

…decided to go deep underwater, all the way to the bottom of the sea in order to bring players some exciting prizes. As such, this game packs an aquatic theme that isn’t as malevolent as it first appears.

The scenery depicts the seafloor that is covered in algae and other aquatic life. Right behind the reels sits a wreckage of an old ship. As players progress through the game, they will undoubtedly start to realize that there might be more than just fish inside that wreckage.

However, there could be something else lurking in the shadows as well. Symbol design is contrasting this eerie scenery with its lively depictions of fish. Most of the icons look like they were pulled straight out of a Disney movie.

One thing that really brings this experience together is the soundtrack. It’s a mix of eerie instrumental music, distant whale songs, and some rather ominous gurgling. Overall, this slot is a thriller!

The core game runs on a 4x5 reel grid and 20 paylines. However, the player can unlock 20 more paylines during the bonus spin mode. As you can probably tell already, it’s the…

…bonus features that really make this game what it is. Players will encounter several different types of Kraken Wilds, each offering some unique features. There is also the Sunken Treasure Bonus as well as the Roaming Kraken Bonus Spin mode!

Melissa Summerfield, Chief Commercial Officer at Pragmatic Play, shared her comment regarding the new release: “Release the Kraken is the fourth game we’ve launched this month, representing yet another precious addition to the Pragmatic Play slot portfolio. With its immersive setting, thrilling gameplay and giant win potential, we are sure players will be battling the fearsome Kraken in search of its treasure.”

Pragmatic Play is a premier software provider in the iGaming industry. The company is known for its high-quality, immersive slot games that offer great features and plenty of innovative options to players.

It also offers a whole range of back-office tools designed to give operators complete control over their player’s experience. Due to their dedication to excellence, it has taken home a number of prestigious awards from some of the industry’s most notable annual events.