Pragmatic Play Explores the Secrets of Egypt in Pyramid King 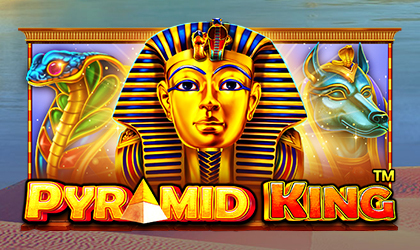 The latest slot game to come out from Pragmatic Play is called Pyramid King and is one of the more interesting releases from this company so far this year.

…takes players to ancient Egypt and is allowing them to win potentially massive prizes if they are lucky enough!

The Tomb of the Pyramid King:

The developer continues to impress this year with its latest release. Taking place in ancient Egypt at a time when pharaohs ruled the Nile valley, the game offers an immersive take on this highly popular genre. Fans of high-quality graphics will appreciate the level of detail it brings to the table. The creative team behind this slot game has designed a background with plenty of depth.

Players will notice the pyramids out in the distance, while the foreground is packed with blue water and golden desert. Although the background is static, there is some sort of animated fog that permeates the entire scene.

Symbol design is every bit as detailed if not more. Even the lower-paying tier that consists of card royals features a great amount of detail. The higher paying tier comes in the form of various jewelry and icons associated with ancient Egypt.

The 5x3 grid slot runs on 25 paylines. The game comes with several interesting features, including a progressive jackpot system. Namely, there’s the Grand jackpot, the Major jackpot, and Minor jackpot.

… 1000x, 100x and 30x the total bet respectively. There’s also the Money Symbol that comes with specific values. Collecting 6 or more of these symbols will trigger the Money Respin option.

Additionally, there’s the Bonus Spin feature with 10 bonus spins. Before the spins start, a special expanding symbol is randomly selected and will cover all of the reels.

Melissa Summerfield, Chief Commercial Officer for the brand, said: “Pyramid King takes a fun, recognizable theme and adds a Pragmatic Play twist with both Respin and Free Spin features. Its action-packed gameplay and mini-jackpots offer players an exciting quest to take the riches of the fearsome King back home with them after a successful adventure.”

Pragmatic Play is a leading provider of high-quality slots in the iGaming industry. The company offers a vast portfolio of games that are highly respected in the industry. It has built a large following as well as a massive content distribution network around the world. Its games are available in every key regulated market through one of its partners. Even so, the team continues to look for new ways to get their games out to players all over.