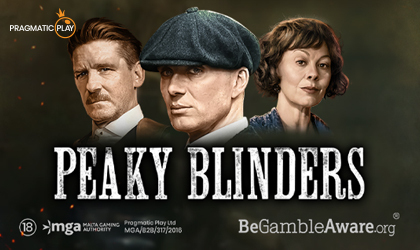 One of the most popular shows on the air right now…

Into the Heart of Small Heath:

The supplier has officially entered the world of branded slots. This popular provider has secured the rights to build a Peaky Blinders game in cooperation with the team behind the original show.

The release of the game was…

…highly anticipated especially by the fans of the show. Fortunately for everyone, this provider with teams all over the world, has gone above and beyond to bring the vibe of the show to the reels.

The visuals in the game are top-notch. The background represents the town of Small Heath, the home of Peaky Blinders gang. Fans of the show will absolutely appreciate the dark, industrial atmosphere of the game.

The background is semi-animated with all kinds of particles…

…floating through the air, adding to the overall sensation. Symbol design is predictable but more than satisfactory.

The lower paying tier is packed with card royals that feature razors. On the other hand, higher-paying tier features character from the show.

The new release is a 5x3 slot game that runs on 20 paylines. The game is not all looks either! The base game experience is great on its own, with fairly thrilling random modifiers.

There’s the “By The Order of the Peaky Blinders” modifier as well as the “Shelby Betting Shop” modifier, both…

Melissa Summerfield, Chief Commercial Officer for the brand, said : “Peaky Blinders marks our first branded title, in partnership with Endemol Shine, and we are proud to release a game based on such an iconic series. It has been very exciting developing content around such an established TV franchise, and we look forward to seeing how it is received by our fans across the globe. This is not one to miss!”

Pragmatic Play is one of the leading software providers in the iGaming industry. The company started out as a small team of dedicated industry professionals, only to grow into an industry leader. It is currently distributing its content all across the world via a massive network of affiliated online casino operators. Speaking of which, it is a staple brand at top tier operators.