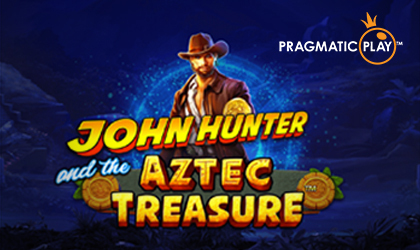 Pragmatic Play, one of the top tier software providers in the realm of video slots, has expanded its offer with a new slot title. Although the game is new…

…its main character is no stranger to fans of this studio. The game takes players on a jungle adventure that can net potentially high bonuses to those who partake.

The brand-new slot game adventure starring John Hunter represents the second time this character has been on the treasure hunt. Originally appearing in Da Vinci’s Treasure, Hunter has grown quite a fan base. The new game places him in the middle of a thick jungle.

With the goal of uncovering the ancient Aztec Treasure, he will have to navigate the thick canopy and deal with the protectors of the treasure.

From an aesthetic perspective, Pragmatic has delivered upon what most expected to get. The prequel to the Aztec Treasure was revered in this regard. All of the fine details were very much appreciated both by players and critics alike. This time around, the supplier went all-in with fully animated backgrounds, different environments and…

… an immersive soundtrack to tie it all together.

Under the surface, the new game brings a rock-solid core game foundation. The company went with a 5x6 grid, which ups the thrill meter.

The studio further went with a number of interesting special features, all aimed at giving the player a unique and ultimately entertaining story. The overall impression the latest release leaves is…

… in line with what most expected to see from feature series title.

Yossi Barzely, Chief Business Development Officer for the developer, comments on the title: “We are delighted to release our newest John Hunter adventure, where everyone’s favourite hero battles through the jungle to gain untold riches. “John Hunter and the Aztec Treasure contains a thrilling bonus round, and with its huge win potential we look forward to players getting their hands on ancient trinkets.”

This new game, along with the rest of their portfolio, is available at all affiliated online casino and carriers.

Thanks to their custom made API, releasing and fully implementing this game into their clients’ infrastructure happened seamlessly.

Pragmatic Play is one of the premier software providers on the market at the moment. Their iGaming content is always near the top of the industry…

…going toe to toe with other top tier players. The company is focused on creating entertaining and engaging games that are at the cutting edge of technology.

They are always looking for seamless integration of their product across a variety of different platforms. They are able to…

… achieve this thanks to their highly capable API. With such tools at their disposal, this software provider has become a popular choice for operators around the world who appreciate easy to use content management solutions.