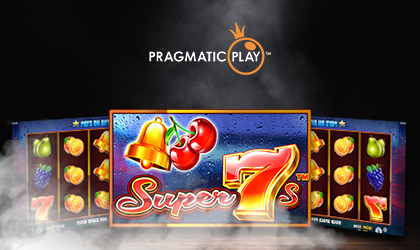 Pragmatic Play, one of the premier software providers in the iGaming industry, has announced the release of a Vintage-themed game titled Super7s. Fans of classic slots…

…will appreciate the simplicity of this release as well as the creativity that the supplier brought to the table.

A Modern Take on a Vintage Slot:

The latest game belongs to the classic niche. However, the game doesn’t follow the classic dogma when it comes to design and visuals. Whereas most classic slots feature simple themes with…

…solid color backgrounds, the developer took a different path. Its creative team wanted to add a more modern take on classic slots, thus merging the modern with the old. The result is quite impressive. The background depicts a window covered in rain. This little detail gives the whole game a unique vibe. Best of all, the image isn’t static. Some of the droplets of rain are animated and slide down the window from time to time.

As far as symbols go, players can expect all of the usual suspects. We’re talking fruits, bells, lucky sevens and more. All of the symbols are very detailed while most feature a small but refreshing…

…animation if they are a part of a winning spin.

As Classic as they Get:

Aside from its modern looks, the game is all classic on the inside. This slot follows the overall feature guidelines that define this genre. The only thing that perhaps stands out is the number of reels. This is a 5x3 reel grid that runs on 5 paylines. Otherwise, you’re looking at a…

…pretty traditional game. There are no flashy special features to be found whatsoever. However, that doesn’t mean that there’s no potential for massive wins. If players draw five of the lucky 7s on the same payline, they can look forward to up to x1000 the original stake.

Melissa Summerfield, Chief Commercial Officer at Pragmatic, said: “Super7s is an easy-to-understand game that appeals to classic slot fans across the globe. With a vintage theme, mixed with mammoth win potential, Super7s will have players praying for 7s across the reels!”

Pragmatic Play was founded in 2015. This software provider is known for quality slot games as well as other iGaming content. Their Live Casino offering and bingo games are the benchmark of quality. Aside from the games themselves, IT also offers a full range of innovative in-game tools. These allow operators to gain full control over the content they offer, as well as the experience of their patrons.

Its attention to detail and dedication to quality has earned them numerous awards over the years. Additionally, the company runs a massive distribution network that spans over several key regulated markets.