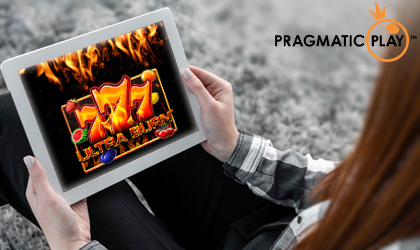 Pragmatic Play, a leading source of quality slots in the iGaming industry, has dropped a new title in cooperation with Reel Kingdom.

The game is called Ultra Burn and it…

…brings a classic vibe to those who appreciate the old school slot aesthetic. Being an exclusive release means that players interested in this game will be able to give it a try via Reel Kingdom’s online casino.

The supplier’s latest slot game comes in the form of an exclusive release. The game was launched in cooperation with Reel Kingdom – an up and coming operator that was recently founded by a group of industry veterans.

With over a century of…

…cumulative experience among them, this group of seasoned professionals wanted something that would boost their presence and make their brand known among players in key regulated markets.

Cooperating with Pragmatic on a limited exclusive release is expected to contribute towards that effort. The new title is a true classic slot game. It went with a static theme that is all about the heat of the fire but also the heat of the reels. Symbols match the theme in the sense that they feature stars, fruits 7s and other classic symbols.

The new release is a 3x3 slot game that runs on 5 paylines. The game comes with no special features, which is perfectly in line with its old school design.

However, this doesn’t mean that the game…

…has nothing to offer. The supplier created the game as a high volatility slot, thus giving players a very explosive gaming experience. Those lucky enough to max out this title’s win potential might hit the 500x jackpot!

Melissa Summerfield, Pragmatic Chief Commercial Officer, said: “Ultra Burn is another exciting addition to our growing slot portfolio. With a traditional feel to the game, combined with a huge win opportunity, it has the potential to be one of the hottest games around. The slot’s simple mechanics and fast, fun gameplay make it perfect for players seeking the traditional fruit machine feeling, with the convenience of online play.”

Being one of the leading software providers in the iGaming industry has made Pragmatic Play a popular source of quality entertainment. The company is known for producing high-end slot games as well as other gaming content that offers immersive graphics and innovative features. Its team consists of experienced professionals who understand the needs of the players worldwide.

With a finger on the pulse of the market, this team is consistently producing games that match what their fans are longing for.