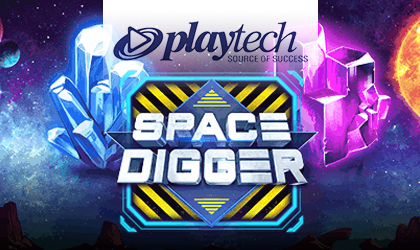 Playtech has launched a new game titled, Space Digger. The new release is said to include interesting new features that add a whole new dimension to how the game is played.

Set in outer space, the offering is definitely going to be one of the better-looking games from this company in 2019. This release has hit the shelves a few days before the studio behind it announced several important additions to their live casino portfolio.

Spicing Up the Game:

Playtech has been experimenting with unique features in their releases for a while now. The setup they have settled on has become known as Game Modifiers. We have seen these used in some of their previous titles, with Justice League being the first one to implement the new features.

Game Modifiers allow the operator to unlock specific features of the game, be it additional spins, different wilds or something else, to a single player or a group of players. The fact that operators can alter the nature of a slot game on their own makes this entire setup highly attractive. Especially when you view it through the prism of other similar solutions. Even though it wasn’t the first game to feature these modifiers, the intergalactic offering is the first to be purposely built to support that tech. Because of that, everyone is expecting this title to really hit it off upon release.

A Word from the Director:

James Frendo, Director of Casino at Playtech, lends his thoughts on the new features: “Playtech’s core objective is to lead the way on innovation in the gambling industry, from both a technological and marketing perspective. Game Modifiers are a unique proposition in the current market, offering our licensees an easy and effective way to differentiate their offering and boost player engagement. Several of our customers have already run very successful Game Modifiers campaigns with Justice League, so we’re confident they will welcome the chance to do so again using our first game purpose-built for this feature, with more to come later this year. With an improved RTP on offer via the modifier, Space Digger presents a truly compelling proposition as a marketing tool and for players looking for something extra”.

Space Digger is currently available on all of the brand’s partnered online casinos.