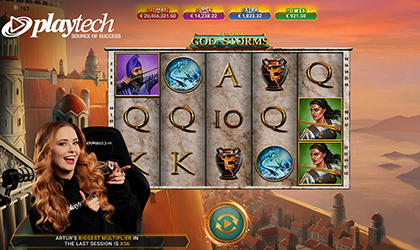 Playtech has announced the release of their second Community Live Slots game titled Age of the Gods: God of Storms.

The new game promises plenty of interesting features as well as…

…a theme that really takes the breath away. The supplier has released the new game via select Flutter Entertainment brands as an exclusive.

The release of Buffalo Blitz last year has indicated the developer’s interest in an evolved type of slot game experience. Namely, the company has started looking into community slots.

…this concept is to have a group of players play a single game together with ‘community spins.’ With the multiplayer gaming becoming the dominant form of entertainment worldwide, it was only a matter of time before a viable solution was found for slots.

What the brand is doing with its series seems to be working. Where Buffalo Blitz paved the way for this innovative mechanic, its latest release takes it one step further.

The game takes players to a mythical walled city that sits on the edge of a misty bay. Visuals alone are enough to keep one entertained for a while. More of the same can be seen on the reels where various warrior characters face off in the higher paying symbol tier.

Feature-wise, there’s plenty to enjoy as well. It provides a a semi-volatile base game paired with a number of interesting special features. There’s also the Bonus Spins bonusing, which is the first time such a feature has appeared in the live arena!

Edo Haitin, CEO comments: “We’ve seen a fantastic response to Community Live Slots with Buffalo Blitz™, and are delighted to be bringing the ever-popular Age of the Gods™ brand to this new audience. Live Casino is essentially an entertainment-focused experience, and, in Community Live Slots, we are delivering an engaging and truly collaborative new style of gameplay. Playable from just 1p a spin, God of Storms™ is consistently popular with newcomers to slots and seasoned players, and as such was a clear choice for attracting a wider audience to Community Live Slots.”

Haitin goes on to add: “The success of live play streaming services demonstrates a player demand for an interactive feel – the experience you would enjoy when playing alongside others in a land-based casino. Community Live Slots recreates that feeling for players, as well as creating an exciting cross-sell opportunity for operators – particularly with a series such as Age of the Gods™, which is already a proven cross-vertical success.”

Playtech is one of the leading software providers in the iGaming industry. The company specializes in high-quality slot games, gamification tools, and other iGaming solutions. So far, it has established a large presence in most key markets around the world.