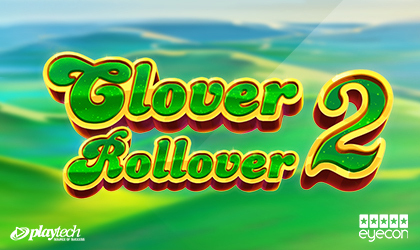 The game from both Playtech and Eyecon has 5 reels, 3 rows and 5 active paylines. However, winning combinations can be formed anywhere on the grid; players only need 3 matching symbols on the reels. The game is made more for low-rollers with the minimum bet set at $0.1 per spin, and the maximum bet at $50. The volatility of this product is low, and the RTP is about 93%. The iconic lucky four-leaf symbol is the most valuable symbol in the game, if punters collect five in a row, the prize will be worth 10000x the bet.

More on the Media:

Paul Gielbert, Commercial Director at Eyecon, said: “Everyone at Eyecon is very proud of Clover Rollover 2. The original Clover Rollover is one of the most recognised and popular slot games in the UK Bingo market, so it’s hugely exciting to be bringing the sequel and our compelling three-tier jackpot to the Playtech Bingo network and beyond.”

Rob Norman, Senior Marketing Manager for Gaming at Sky Betting & Gaming, said: “Some slots have a truly timeless appeal, and we’re delighted to be bringing a brand new spin on Clover Rollover to our players. With three different shots at a jackpot prize and more frequent wins, Clover Rollover 2 promises to be even more engaging for Bingo and slot players.”

Director of Digital Bingo at Playtech, Angus Nisbet added: “For over 12 years, the original Clover Rollover has been one of the most consistently popular slots across the Playtech Bingo network – so we’re very excited about the potential of this highly anticipated sequel. The Eyecon team has done a fantastic job of updating the graphics and in-game presentation, and we know players will be excited by the chance to win three different jackpots, especially with wins triggering more frequently.”

Today, Playtech is one of the largest software development companies, with more than five thousand employees worldwide and headquarters in 17 countries. In 1999, somewhere in a small office in Estonia and in 2001 they launched their first casino and have expanded steadily ever since. One of its strengths is that there are many small software companies or other specialized software providers such as Virtue Fusion and Quickspin, which integrated and allowed the brand to develop rapidly over the years, and therefore it is not surprising that players can find their games everywhere on the online gambling market.