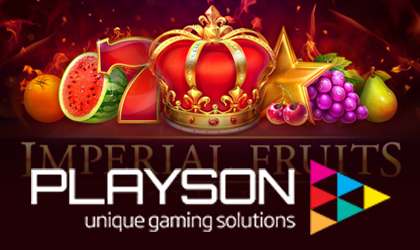 Playson has announced the release of a brand-new slot game that promises to bring a bit of that old school vibe to their excellent portfolio. The new game brings a variety of awesome features, but also the classic aesthetics one could find in mechanical one-armed bandits back in the day.

The game represents another addition to this company’s Timeless Fruit Slots portfolio – a category of games that features the classic Fruits symbols. With the new addition, this niche portfolio of their promises to become one of the best compilations of its kind on the market.

The theme Playson has put together for this game is quite simple, yet rather appealing. Players are presented with a textured background that resembles something you can find in actual casinos. We are talking about that combination of red suede with gold details, usually in the form of a diamond grid. The same type of minimalism can be witnessed on the frame itself. There are no intricate details to be seen anywhere. Instead, the player is presented with a very utilitarian setup.

As far as the game itself goes, the base mechanics should be familiar to any seasoned slot aficionado. It’s a timeless 5x3 type slot with 40 fixed paylines.

As far as special features go, the player is presented with the standard scatter and wild functions. Wild will replace any symbol except for scatters, while the former ensures a win no matter what the player draws on the reels. Even though there are no actual mini games in this game, it still retains a high level of replay value.

Fans of classic slots will absolutely love the entire royal influence that is reminiscent of older games. So far the game is gaining a fair amount of traction thanks to a good publicity campaign as well as the fact that Playson is one of the few software studios who build this type of games fairly regularly. You can try Imperial Fruits slot on Playson’s own website while this slot is also available on select online casinos which are partnered with this software provider.

Playson belongs to a category of well-established software developers residing near the top of the ladder. Their games are highly polished, optimized to run on various systems and generally high in quality. This company is certified to operate in regulated markets such as Italy, the United Kingdom, Spain, Malta, and Sweden while they are always on the lookout to further increase their reach.

One of the more unique things about this brand is their Timeless Fruit Slots series which is probably the only collection of classic slots of that kind on the market. So far, this company has released over 50 games. That number is constantly growing as Playson does their best to address the ever-growing needs of the online slot industry. The news and press releases coming from this company indicate that we will be seeing much more of their games in the future.