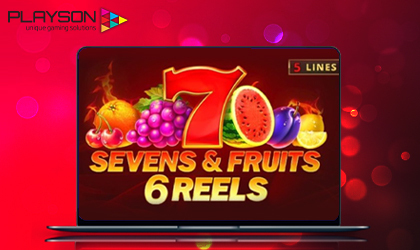 Playson has prepared a surprise for its most loyal fans. The company has announced a brand-new addition to its legendary Timeless Fruit Series.

…portfolio comes in the form of Sevens and Fruits: 6 Reels – the supplier’s latest and greatest slot game to hit the market.

The developer’s series is arguably among the best Fruit Slot offerings on the market at the moment. The team behind this brand has borderline mastered the genre, bringing it back to the mainstream. The supplier has recognized the potential of these games early on and has decided to use this rather successful formula to create a whole range of fruit slots.

The new title is the latest addition…

…to this series. The game brings that same simplicity that has charmed players all over the world.

Players can expect to get…

…the most straightforward slot experience. Graphically, this game is all about simplicity. Much like many of the games from this series, the new release brings a basic background paired with large, all too familiar symbols.

As Basic as They Get:

The slot is about as basic as they get in terms of game mechanics. Players can look forward to a 6-reel slot game that runs on 5 paylines. In line with the genre, there are no special features.

In fact, the game doesn’t even bring a…

…bonus spin mode. While such a Spartan layout might be considered a con in other genres, it’s exactly what classic Fruit Slots are all about.

Vsevolod Lapin, Head of Product for the software brand, said: “Sevens & Fruits proved to be very popular with Playson fans all around the world when it was first launched, so we decided to ramp up the gameplay with the addition of another reel.

“This simplistic yet visually stunning slot is sure to resonate with a wide audience. With even more ways to secure big wins, Sevens & Fruits: 6 Reels is set to become another stellar addition to the Playson Timeless Fruit Slots range.”

Playson is a leading software provider that is specialized in high-quality slot games. This popular studio is known for its original titles that have proven their worth in some of the most competitive markets around the world. The company is working with operators from all over, delivering quality entertainment to players who are looking for good value and innovation. It is especially known for its Timeless Fruit Slot series that has perfectly encapsulated the classic slot vibe. With a dedicated team of talented professionals at the helm, Playson is promising to become an industry authority.