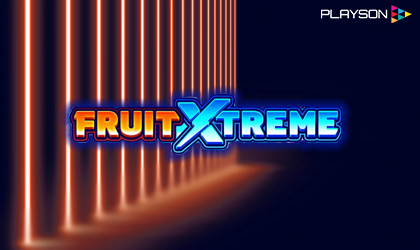 Playson, one of the most popular suppliers of Fruit-inspired slots, has released another such game. Titled Fruit Xtreme, the new game is actually a sequel in the Funky Fruits series.

The new game brings all of the features that have made this series so awesome in the first place. Players can expect all kinds of thrills!

The developer is no stranger to fruit slots. This provider offers one of the largest portfolios of fruit-inspired games out there. The title fits that environment perfectly. It features…

…a simplistic theme that is mainly there to offer some sort of visual stimulus as players focus their attention on the reels. The background feels static but isn’t. It depicts a lightning bolt type of effect that spreads all around the reels.

Although it lacks any serious animation, the background does feature a pulsing effect which is subtle but definitely noticeable.

Just like is the case with most fruit slots, symbol design is the most exciting thing visually. As expected, all symbols come in the form of fruits, lucky sevens, and BARs. It’s worth mentioning that these…

…symbols are highly detailed and have that crisp look to them, which makes the whole experience that much more satisfying.

Lastly, there isn’t a soundtrack which is something a decent amount of fruit slots have in common. However, the game is packed with sound effects that have a nostalgic, land-based slot vibe to them.

One of the reasons why fruit slots are so popular is the fact that these slots have that classic feel to them. Their inherent simplicity is what makes them more sought after than ever before. In the case of this release, that simplicity…

…comes in the form of a 5x3 grid that runs on 5 paylines. The game doesn’t come with a bunch of exciting special features, but it does have a few tricks up its sleeve.

Namely, if players draw 9 or more identical fruit symbols on reels 1-3, they will trigger a x3 up to x5 multiplier depending on the number of identical symbols they draw.

Vsevolod Lapin, Head of Product at Playson, said: “Fruit Xtreme is a stylish new take on the traditional fruit slot and a worthy new member of Playson’s ever-expanding suite of titles. We look forward to showcasing Fruit Xtreme at ICE London and showcasing how our comprehensive offering is a fantastic addition to any operator’s portfolio.”

The developer will showcase its new title at ICE London, while the game is set to be launched soon after. Affiliated online casinos from its distribution network will gain access to this game at that time.

Playson is one of the leading software providers specialized in creating cutting edge gaming content for the iGaming industry. The company is licensed to operate in several key markets around…

…the world and offers some 60+ omnichannel games at the moment. Aside from its large selection of games, it also offers several content management tools.