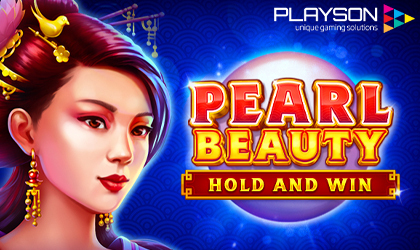 Playson, a prominent software provider supplying some of the top games in the iGaming industry, has announced the release of another such title – the Pearl Beauty: Hold and Win.

The new game brings simplicity and familiarity in more ways than one. That being said, players can expect to run into some fairly interesting features!

The Pearl of the East:

The title belongs to a long line of Eastern-themed games that the developer has released so far. However, it still stands out in its own way.

The theme is a big part of what makes it stand apart. It’s simple and minimalist by nature. When the game loads up, players are presented with a dark blue background that offers a great contrast to the golden frame and reels.

…the core of interesting graphic details are located at the very center of the screen, on the reels themselves. The provider went with the standard card royals in the lower-paying tier. The higher paying tier comes in the form of various characters from the game, traditional eastern iconography, and more. The game's simplicity of design is only made more interesting with the features this title has to offer!

This latest release might come across as a very simple slot game and in many ways it is. However, it does come with a few surprises.

…a 95.05% RTP and is considered to be around medium volatility. The special features include the bonus game mode as well as the jackpot feature. Players who are lucky enough to access the jackpot feature will have the chance to win a Mini, Major and Grand Jackpots .

All in all, there’s plenty of opportunities…

…to win up to x1000 the original bet. The brand has made this awesome new slot game available through its network of affiliated online casinos.

Playson is one of the leading software providers in the iGaming industry. The company is based in Malta but runs teams from different locations. With an international team, the supplier is currently present in all key regulated markets around the world. Players from Italy, Romania, Spain, Sweden, the United Kingdom, Malta and elsewhere can find its titles at their online casinos.

What the supplier does best is build high-quality slots that carry all kinds of innovative features and solutions. Due to its standards of quality, many online casino operators took interest in what it has to offer.

As a result, it currently runs a massive distribution network that includes some of the largest names in the business. The company keeps on expanding, all while retaining its level of quality and ingenuity.