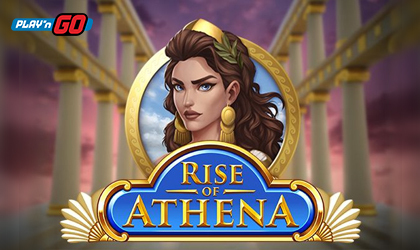 Many slots have used Zeus for inspiration and his precious daughter Athena. Rise of Athena is the second Play'n Go, inspired by the Greek goddess. In the Riche Wilde and Shield of Athena, she was described as a brutal warrior who uses Medusa's head as a weapon. In this video slot, the designers show Athena from a different perspective, more as the manifestation of wisdom.

The slot has a charming look and the grid is placed in a temple dedicated to Athena, Parthenon, with bright blue skies and hovering clouds behind that add liveliness to the game. The action takes place in 5 reels, 3 rows and 10 active paylines. However, when it comes to statistics, the mathematical scheme is identical to the one found in most of the provider's 10 payline games. Interestingly, this is a medium-volatility game which is available on any device. The game offers a total betting range from $0.1 up to $100 per spin, with a maximum potential win of 5,000x the bet. The RTP is 96.2% which is above the industry average.

The game is all about the extra spins feature and wild symbols which are the keys to success. Wild symbols replace all other regular symbols and also have a random multiplier of 1x -3x the bet. In addition, if several Wild symbols land on the same spin at the same time, they are multiplied, so in theory, multipliers can go up to 27x the bet. Getting 3 or more owl scatters symbols anywhere during the main game will trigger extra spin round. The main difference during the bonus game is that all Wilds are now sticky and gradually lose their multiplier value.

The developer joined the online gaming world in 1997. It had several well-established vendors to compete with, including Microgaming and NetEnt, while being a start-up brand with limited resources to compare. It has offices in Sweden and in Hungary. On the product side, there is an online casino solution offering a wide range of games and slots such as Enchanted Meadows and Dragon Ship, progressive jackpots and more. Instant games or minigames are also available, and adaptable to mobile format. All games are available in more than 30 languages.