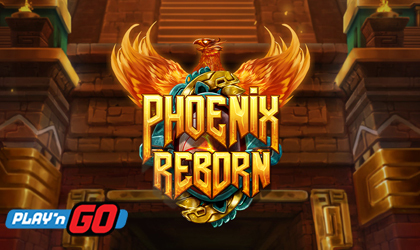 It is widely known that a Phoenix has the ability to rise from the ashes and in the latest slot by one of the most popular developers, Play’n GO, we will once again have the opportunity to witness its power to be transformed and reborn.

The game is aptly titled, Phoenix Reborn, and its players have been impatiently waiting for this game to come out for quite some time. As you probably assume, it was inspired by the Aztec civilizations, how they lived and what surrounded them.

It looks like the supplier is generally interested in different civilizations. In one of their newest reel slots, they perfectly display the Mayan civilization and its cultural and architectural wonders.

On the other hand, in this game they are touching upon the Aztec’s brave warriors along with animals that lived with them in that period of time.

Furthermore, this video slot consists of five reels and breathtaking graphics and design. Surely, one of the most significant symbols of the game is the wild character that comes in the form of a mythical Phoenix that, just like this animal, has the ability to transform and regenerate.

Play’n GO has put a lot of effort into making this fun slot. Namely, they have animated both the wild icon and its transition into an expanded sign.

Moreover, these talented people accentuate how rewarding, yet exhausting it was to do all this work and that it took them a lot of time to bring this story to perfection!

Finally, they have spoken about this experience and what inspired them to create something so magnificent and out-of-this-world. Obviously, their loyal players motivated them to do a remarkable job:

“With the math of the game finalised early on, we were able to really focus on the design aspect of the game. We were highly motivated to deliver a visual spectacle and the graphical elements are something special, which we know players will enjoy.”

Just like most people, their team was made of a small group of ambitious and talented individuals who were mostly working for other cutting-edge companies. After a while, they have come to the realization that they are absolutely capable of doing more, so they established the Play’n GO corporation.

Today, they are one of the biggest companies in the gaming industry, continuously working on developing top-quality games and focusing on delivering the best service to both their players and clients.