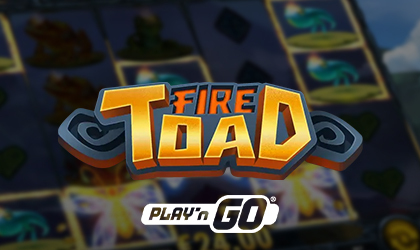 Play'n GO goes live with its latest online slot called Fire Toad. This fantasy-themed video slot has a background of a beautiful tropical island and the main character here is the amphibian creature Fire Toad. This mysterious frog is getting stronger as it grows and brings nice payouts. The game will appeal to fans of slot machines with this powerful symbol that they can seek and hope for the biggest payouts. This a high volatility title has 5 reels, 4 rows, 1024 active paylines and the game promises a maximum payout of 5000x the bet, while the players can place their bets between $0.1 and $100 per bet. That’s not all the provider was thinking about everything here, and big plus here is RTP of 96.20%, which is above the average.

Fire Toad proves that the provider has a creative approach with a characteristic design and original ideas. Imagination and innovation are the things that set apart this brand from other slot developers, as many of their more exclusive games perform well in markets around the globe!

Johan Törnqvist, Play’n GO CEO, commented: “Creativity is a lifeblood of entertainment. Developing new ideas and introducing new concepts to players keeps them engaged and interested in what you’re going to do next. Allowing people to be creative also creates a more positive and productive atmosphere, and that leads to great results!”

About the Swedish Casino Provider:

Play'n GO was established back in 1997 and since then operated as a division of well-known providers for eight years, and in 2005, it began operating as an independent provider. It strives to create high-quality games and launched more than 250 great casino titles. In 2019, it received the Mobile Provider of the Year award in addition to its excellence in mobile game development. Other major awards the company has received include Best Casino Provider of the Year, Best Employer Brand of the Year at the Malta iGaming Awards of Excellence in 2019. The Swedish-based operator content is available in more than 43 countries around the world. This company ranks among the leading online gaming companies in the iGaming industry and their most popular titles are Book of Dead, Sails of Gold, Cloud Quest, Pimped and more.