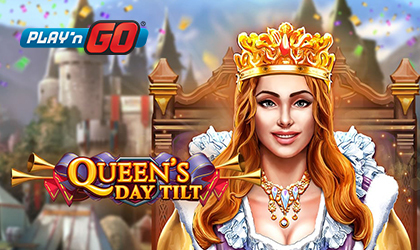 It’s just the beginning of February, and we already have a plethora of reasons to be excited. The first that comes to our mind is the latest game from Play’n GO, called Queen’s Day Tilt.

Royal At Its Best:

In approximately ten days, this game will be launched! The self-explanatory title gives a small preview of what you’re about to experience.

Your duty is to impress the main character – the Queen! We are talking about a huge gathering where you will encounter various interesting individuals, including royal knights that are battling for the queen.

She organized this fiesta, therefore, every single moment must be subordinated to her majesty, of course!

More About The Features:

It’s worth mentioning that this is an innovative game filled with thrilling features. This slot machine can be played on a small 3x3 grid and it will reward you if you manage to match at least two identical characters vertically or horizontally.

As we already mentioned, this reel slot has several astonishing features that will surely satisfy the needs of even demanding players.

The Queen herself can turn into a wild and, along with The Rule feature, she can be seen on the grid and help you make more winning combinations!

And There’s More To Come...

One of the most enticing parts of this game is the Queen’s Day feature that can be activated if the grid is completely empty, giving players five casino spins with a win multiplier of x2!

Grabbing a win on both HP Knight icons in a single spin will automatically enlarge this multiplier by one.

If on the grid you encounter only one sign, then the tilt feature will randomly blast-off and clear the grid, meaning it will trigger the Queen’s Day feature.

Both of these rounds can happen during bonus spins, during which you will have the opportunity to reactivate an additional five spins.

Saving The Best For Last:

Now, we have come to the final part of this game. You will come across an interesting feature called the Game of Accession, which awards respins that you can launch when you are collecting a win on HP Knight icons during the base game.

Then you will receive one additional re-spin and it will showcase only HP symbols. Furthermore, you will have to choose between the red or blue knight to see which one gives more winning combinations.

Depending on the result, you will be rewarded with either a re-trigger (if it’s a tie) or a x2 multiplier (if the one you picked wins) on the win or the earnings will be collected (if the one you chose doesn’t win).

Keep in mind that the Queen’s Day feature will not be activated during this one!