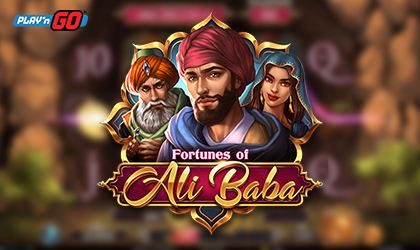 Play’n GO, one of the most popular software providers in the iGaming industry, has announced the release of a brand-new slot game titled Fortunes of Ali Baba.

Based on a legendary story that centuries-old, Ali Baba has once again found a way back into the pop culture.

The Tale That Never Gets Old:

The supplier is one of those software providers who have a knack for old tales and legends. The fact that they’ve decided to give Ali Baba a chance on the reels comes as no surprise. The company did a great job of delivering a simple theme that is basic in many aspects, but rather unmistakable in terms of what it represents.

The entire action takes place in front of a tunnel entrance that has been cut into the side of a mountain, just like in the tale. It’s worth mentioning that the entire background is static as this slot offers rather limited animations.

Symbol design follows the same idea as the rest of the game – simplicity above anything else. The lower paying tier of symbols features the all too familiar card royals while the higher paying tier includes spices, daggers, gems and more. Scatter comes in the form of a princess while the wilds come in two different flavors – Ali Baba and his associate.

To top everything off, players are presented with an exotic soundtrack that gives the whole experience an almost cinematic feel.

The Treasures from Within:

The title runs on a 5x3 grid and a total of 20 fixed paylines. However, despite this game having enough potential in the core mechanics alone, it still brings a number of interesting special features. There is the Den of Thieves feature that takes players deep into the cave where an abundance of gold sits all over the place.

Once there, players are expected to make a choice…

…between four different cups – each containing a lucrative prize. Additionally, the bonus spin mode is triggered only when players defeat certain levels of the pick and choose a game.

Johan Törnqvist, CEO at Play’n GO commented on the release: “The story of Ali Baba is well-known and enjoyed by people all over the world. We wanted to take the most exciting elements of the story to create a fun game that people could enjoy playing as well as experiencing the most exciting parts of a well-loved story. The story is a big factor in storytelling, and we want to give that to audiences, to increase their enjoyment and leave them wanting more!”

Play’n GO is one of the most trusted brands in the iGaming industry. With a large team of dedicated professionals and decades of experience, this company has been releasing games that were nearly instant hits in key markets. Overall, brand is a true figure of authority in this niche.