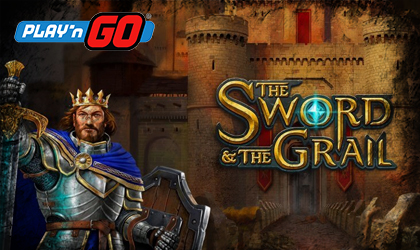 Play’n GO, a respected software provider that services top-tier operators across various markets has announced the release of a brand-new slot game. Titled, The Sword and the Grail, the new game brings players on a magical adventure.

Aside from a compelling theme and impressive graphics, it also offers a refreshing mini-game and much more.

The Knights of the Round Table:

This slot is set in medieval scenery and is based on the legend of King Arthur and his knights of the round table. As such, players can expect to see…

…all of the usual suspects in the game. King Arthur is there, and so is his trusty wizard friend, Merlin, Lady Guinevere and, of course, Lancelot himself. The game is full of interesting references, such as the scatter and wild symbols being the sword and the grail.

The theme itself is set in the chamber where the round table resides. The developer went so far as to add a few awesome animations to the background and make it that much more compelling.

As far as symbols go, lower-paying ones feature various coins while the higher paying ones represent the main characters. The sword scatter extends over two spots on the reels and is the only animated symbol in the game.

Speaking of reels, the base game features the well familiar 5x3 reel setup with 20 fixed paylines.

To trigger the mini-game, players will need to draw three sword scatters. Once in the spin mode, they will be able to collect swords and unlock multiplier wilds. This mini-game has…

… four stages in total meaning that players can advance up the ranks from a simple squire to the King of the Knights. Aside from awesome titles, players will unlock a new multiplier with every stage of the mini-game.

The largest multiplier that can be unlocked is the x100 multiplier in the last stage. However, since players will have to unlock every previous multiplier on their way to the fourth stage of the mini-game, there is a lot of potential to amass the wins.

The game is currently available at all affiliated online casinos.

Play’n GO is one of the oldest and most respected software providers in the industry. Founded back in 1997, the company was at the forefront of online casino…

…development for years, feeding innovative technologies to the market. Back then they operated under a different name. The company, under its current moniker, was founded in 2004.

Today, it has grown to be one of the largest providers of custom gaming solutions and is in a unique position to know exactly what the industry needs and where it is going. With such experience and knowledge, they are producing some of the most popular titles.

The Sword and The Grail
982
PLAY