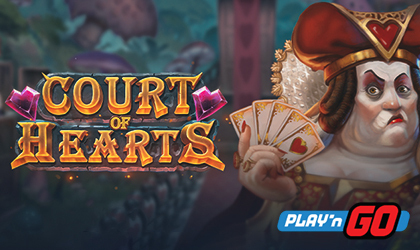 The classic Lewis Carroll story never stops to captivate, and Play'n GO has developed a very vibrant addition to the series of Court of Hearts. With gigantic mushrooms over the open reels, players are invited to a journey down the rabbit hole. Players who prefer a less risky version can enjoy its predecessor Rabbit Hole Riches. The soundtrack definitely adds excitement to the overall atmosphere and that is combined with features such as cascading wins and wild modifiers.

The action takes place on 5 reels, 3 rows, and 10 active paylines where the RTP is 96.27%. As for the symbols, the queen of hearts herself is the most valuable symbol and this symbol acts as a wild in the bonus round with a progressive multiplier and helps players to generate a maximum potential win of 8500x the bet. The cascading wins feature is triggered whenever players get a winning combination and remove all winning symbols which leaves space for new symbols to appear at the top and the process will repeat as long as players keep generating new wins.

CEO at Play’n GO, Johan Törnqvist, commented on the launch: “The overwhelming reaction to Rabbit Hole Riches, in particular, the praise for its design and narrative, meant we simply had to continue the story. Lewis Carroll’s works have been reimagined several times throughout the years, so we felt it important to establish a distinct world for our creation and produce something truly entertaining, both visually and in gameplay.”

Play'n GO is a Swedish-based online casino supplier that has been operating since 1997 and is renowned for creating revolutionary online content available for players and casino providers around the world. This company also has offices in Hungary and operates under licenses issued by Alderney, Belgium, Denmark, and the United Kingdom. Its innovative content is available and translated into 30 languages, and it also offers multi-currency betting. The company’s team of artists and mathematicians develops casino content using its own technology. The brand as been in the iGaming industry for a long time and players can find plenty of other casino games in addition to slots such as roulette, blackjack, video poker, and scratch cards.