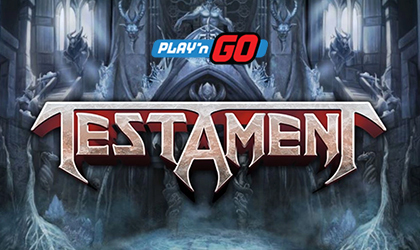 Play’n GO has announced the release of a new slot titled Testament.

Named after one of the most popular thrash metal bands in the world, the new game…

…brings that trademark energy that is well familiar to the fans of this band. On top of that, players can look forward to interesting features and a rocking theme!

The developer is bringing the high gain distortion to the reels with the release of its latest game. Based on the popular thrash metal band, it features a dark theme that is bound to bring on the chills. With that said, the brand’s team has kept things relatively simple.

The game doesn’t bring a cluttered, busy scenery. Rather, the game is offering a simple background that depicts some sort of a hall. It’s dark, broody and ominous.

Symbols are about as metal as they get. The lower paying tier consists of the usual card royals, however, each and every one is designed to depict the mood of the game.

As for the higher-paying tier of symbols, this is where things get demonic! The team behind this release has invested a lot of effort into making highly detailed, rather horrific icons for this game.

As the cherry on top, the title is packed with awesome music, just as one would expect considering it’s based on one of the most prolific thrash metal bands in the world.

The core game used in the title is a familiar one. It rocks a 5x3 reel grid that runs on 243 ways to win mechanic. Right off the bat, the game offers a decent potential for a win.

Players can look forward to a maximum potential RTP of 96.2% although…

…online casinos can choose to reduce that rate down to 84.2%. As far as special features go, it offers a bonus spin mode, awesome wilds, and the Testament spins. The namesake spins are similar to the bonus spin mode, however, they expands the reels to bump the ways to win from 243 to 2,400!

The developer offered a brief comment on this title: "We're striking a chord with our latest slot title, Testament! Join one of music's most influential thrash metal bands as they join the slot world."

Play’n GO is one of the largest software providers in the iGaming industry. Specialized in developing immersive slots, this company has been making a name for itself by releasing innovative games that have become popular all over the world. With a massive network of distributors in its network, it is slowly becoming a figure of authority in this ever-growing industry.

The company is currently following a busy schedule with numerous releases planned to hit the market in the following months.