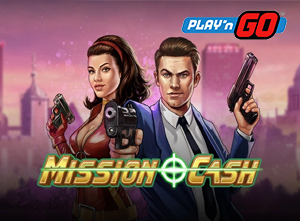 Espionage, conspiracies and charismatic main characters are all integral parts of any solid spy thriller. Play’n GO’s latest creation brings plenty of that…

…aesthetic and vibe in a slot game that promises to be a hit.

One look at this game reveals where Play’n GO has drawn inspiration from when they were designing this latest title. The game has a very distinctive 60s spy show vibe with a set of characters that could be found in any iconic spy thriller from this era.

Fans of the legendary James Bond series or The Saint will absolutely appreciate the aesthetics of this game. Speaking of which, the game is set in what appears to be the HQ of a spy organization somewhere deep underground. The massive background is full of computer screens and various workstations that display all kinds of cool parameters.

As far as symbol design goes, players will be treated with a deck of card suits paired with a set of character symbols that depict all of the main protagonists. Just like is the case in every spy novel worth its salt, there is the suave spy, a pair of Femme Fatales and a quartermaster responsible for keeping all of the spy toys operational.

…as well as the standard bonus spin modes.

Unveiled during the developer’s Play’n Show event held at the London Ritz Hotel on Tuesday, the game was one of four new titles that were presented to the audience that night.

Johan Törnqvist, CEO of the company, was eager to share his thoughts on the release as well as this company’s end of the year results: “Mission Cash is based on a well-loved theme, and we’re bringing the fun and excitement it generates into this game. Players will love how we’ve captured the essence of the genre in the look and the gameplay. We’re approaching the end of the year but, after Mission Cash, there are still plenty more titles to come. We’ve performed strongly throughout 2019, and we intend to continue that through the final quarter and into 2020.”

Play’n GO is a Swedish-based software provider that specializes in creating and distributing high-end gaming content and online slots. The company has been present on the market since 1997 when it was officially founded. Since then, this provider has become one of the largest entities on the market with a massive portfolio of slots as well as other services.

Such business practices have helped them attract a number of top tier operators from around the world who have joined this company as partners. Today, itcontinues to create engaging and immersive games that push the standards of the industry and set the example of what iGaming should be about.