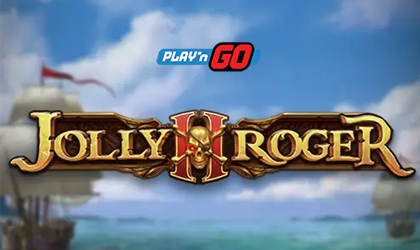 Play’n GO has announced the release of Jolly Roger 2. This is a sequel to the extremely popular original that was released in 2012.

…is bringing a lot of the vibe that has made the original popular, but also adding plenty of new stuff to the fold.

The Return of the Pirates:

The supplier is back with another awesome game. This time around, we’re back on the open seas, fighting ships of the line we search for hidden treasures. That’s right; it has released the highly anticipated sequel to its Jolly Roger slot game.

The sequel comes packing awesome features as well as a highly immersive theme. Players who decide to give this game a try will find themselves on the deck of a pirate ship. The background features the ship along with two other ships training it across the almost neon blue waters of the Pacific. As expected, the background is animated.

…are subtle to a point where they don’t draw too much attention. It’s arguable the best part of the new title is the visual experience is found on the reels. The developing team went all out on details when it comes to higher-paying symbols.

Players will find all kinds of treasures, gems, and other similar symbols in this tier. The lower paying tier comes in the form of card royals styled to match the theme.

The Treasures of the High Seas:

The 5x3 slot game runs on 20 paylines. As expected, the game is loaded with awesome features that give the already exciting base game even more character. Namely, there’s the Compass multiplier that can add up to x10 on any spin.

If that’s not spicy enough for you, there’s always the Bonus Spin Mode with four unique prizes that a player could potentially win.

…20x the total bet. Best of all, the Compass feature can activate during this feature. The Bottle of Rum bonus spin is another awesome in-game mechanic followed by the Battle Bonus spins where players get to play out a battle mini-game. Lastly, there’s the Treasure Hunt feature with buried maps and hidden treasures.

Martin Zettergren, CPO for the supplier said: “Jolly Roger 2 is an epic tale for players to enjoy. Not only do you have the fun of playing and experiencing all the different features, but they all tie together to create an entertaining story. We believe that this sort of attention to the narrative is the next stage of slots developing as an entertainment industry, and you can see that in titles such as this one.”