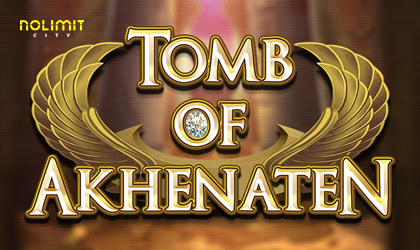 Nolimit City has perfected the mathematical model in its Akhenaten's Tomb video slot. The biggest innovation in the game is the Sticky Win respins feature, which is activated in the bonus round. Players can get solid wins during the standard game based on 5 reels, and 3 rows if they are lucky enough to have Pyramid Wilds, and it will definitely keep the game exciting while they are waiting for the extra spins feature. The explorer is the wild symbol in the game and will replace all of the other symbols to help punters create winning combinations.

There is also a pyramidal wild that is only activated during the Sticky Win Respins feature, which also expands the number of paylines from 243 up to 1024. If players improve the re-spin payout, another row will be added, bringing the number of active paylines up to 3,125! The meter's spin is above the reels, and players will get a pyramid wild symbol added to the corresponding reel if a red bar lands on top. This will also turn any standard symbols above the Pyramid Wild into wilds. To activate the Akhenaton Spins bonus, at least 3 scatter symbols are required. This is a high-volatility game with an RTP of 96.09%.

Nolimit’s Per Lindheimer, Product Owner said: “To reiterate on multiplied wins with a respin mechanic has been really fun. I have high hopes that the fans of Tomb of Nefertiti will find it to be enriched and a worthy successor of the Egyptian throne!”

Nolimit City has over 10 years of experience with leading game software providers and operators, and the brand is a relatively unfamiliar developer with headquarters in Sweden and Malta. With its growing library of slots, it delivers modern concepts and themes as well as additional features and bonuses. Visually, its slots are excellent and can be played on all major platforms such as iOS and Android. This company is completely self-regulated, which means they can provide special features and exclusive ideas. For example, its has slots with great maximum potential wins such as the Ice Ice Yeti title where the win is 8,800x the bet.