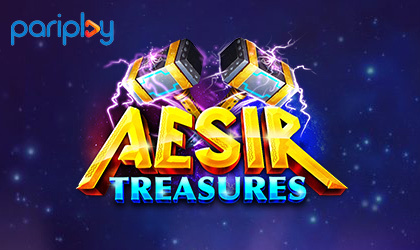 Aesir Treasures, an online slot takes players to the realm of Scandinavian deities, where players will use 4 different extra spins modes and benefit from characters like Thor, Freya, Odin, and Loki. Inspired by Scandinavian mythology, the title makes extensive use of familiar elements often found in many slots with a similar theme. The game design is top-notch and the high-quality graphics are impressive. The soundtrack adds a finishing touch to the overall ambiance.

This is a standard 5-reel, 3-row game with 243 active paylines. Players can start placing bets from $0.3 while a maximum betting option is $60. This is a medium volatility title with customizable RTP ranges, which means in this case that RTP can be 93.89% or 96.23%, therefore players should check this data before making a deposit. In this title, players can expect a jackpot of 2000x the bet. As for the symbols, there are classic ones such as A, K, Q, J, 10 and 9 while higher-paying ones are Valknut's coin, Freya, Odin, Thor's Hammer, Loki and Thor.

A Mystical World Full of Excitement:

There are a lot of interesting options in the title and players will not get bored in the base game with multiplier wilds and thunder spins. For bonus games, however, players have to be more patient!

Christine Lewis, Pariplay’s Chief Commercial Officer, said: “Aesir Treasures takes players to a mystical world full of non-stop excitement as they go on a quest to fulfil their destiny as a loyal helper to the Norse gods. With a popular theme, beautiful illustrations and adrenaline pumping features, Aesir Treasures is a thrilling addition to our expanding games portfolio that will bring players an out of this world gaming experience.”

Getting to Know the Provider:

Pariplay offers casinos both land-based and online slots. Like other game providers, its goal is to stand out in today's congested iGaming market. The company operates under the Gibraltar and United Kingdom gambling commissions and its popular slots include Dragons of the North, Parrot's Gold, and Goldorado. Worth mentioning is Rumble Rhino, which donates 10% of all winnings to the conservation of rhinos. It also offers roulette, scratch cards, and keno, bringing the total to over 65 casino games. The brand’s casinos include sites with a great reputation such as Bet It All Casino and 888 Casino. In 2018, the supplier won the EGR Mobile Gaming Software of the Year award. The application is using precise geolocation and allows users to play games for real money at specific locations in a land-based casino.