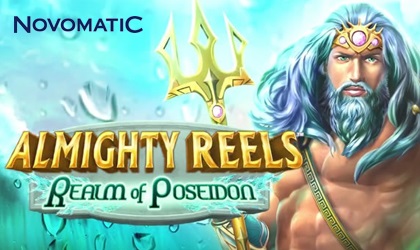 Greek Mythology is very much alive and kicking, thanks to the latest slot release from Novomatic. Almighty Reels – Realm of Poseidon is a mobile compatible slot with a 5-reel and 25-line setup. Set in the golden lost city of Atlantis, Poseidon is waiting for a showdown to end all showdowns and you could scoop big rewards by helping him on his quest. Multipliers, free spins, scatters, wilds and giant symbols are packed into the reels and with spins starting from as little as 25p, it’s a video slot that is suited to players with even the smallest of budgets. High rollers can splash as much as £500 into every spin, which results in bigger wins.

Symbols on the reels include typical card values of; 10, J, Q, K and A as well as Poseidon, warrior helmets, golden urns, musical harps, golden coins and cornucopias. When it comes to bonus features, the golden coin (scatter symbol) is the key that unlocks the free spins and landing this in full view will do just that. Before your 10 free games start, a random symbol from the following will be chosen as a giant 3x3 wild symbol for the duration of your free games; Poseidon, warrior helmets, cornucopias, musical harps and the golden urns. Giant symbols will appear on reels 2, 3 and 4 and can create colossal wins.

This medium variance slot is well worth a shot and can be right now at Mr Smith Casino. Keep your eyes peeled for Poseidon during the free games bonus as this is your chance to bag eye-watering wins with a giant 3x3 symbol.

Greentube Goes Live with Lord of the Ocean 10 Win Ways

Get Ready for the Showdown with Wild Moon Saloon

FunFair Live with Online Slot Bounty on the High Seas