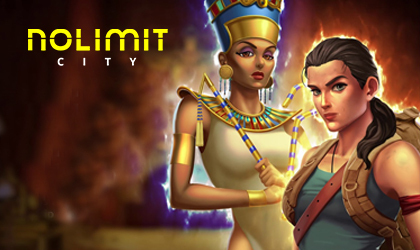 Nolimit City has broken the news of a brand-new slot game addition to their portfolio. Titled Tomb of Nefertiti, the game takes players on a…

…thrilling adventure set in ancient Egypt. On top of cool graphics, players will also be treated with a solid base game and interesting special features.

This latest game takes place in ancient Egypt where players are tasked with unraveling the mysteries of Nefertiti – the wife of Akhenaten, an ancient Egyptian pharaoh. The game features a theme that perfectly matches its storyline. The studio behind this release has taken a rather simple approach to design. In a way, the game is fairly minimalistic and leaves more to the imagination.

The background depicts cloudy skies only disturbed by the towering pillars of an ancient Egyptian temple. As far as slots go, this one is far from cluttered. The visuals are simple yet elegant, leaving the player with a great view but not something that would end up being distracting. As much as the background is simple, the symbols are not.

Nolimit did a great job of bringing ancient Egyptian characters and culture to life. Lower paying symbols come in the form of card royals done in a period-specific manner, but the higher paying ones are the impressive ones.

The release features a solid core game rooted un a 5x3 grid and 20 paylines. The studio has also added several special features such as the Curse of Nefertiti and Wild Raider that make the entire gaming experience that much more interesting.

Per Lindheimer, Product Owner for the brand, said: “Tomb of Nefertiti’s main game will captivate you with its random features and multiplied wins in the overall respin mechanic, all to keep you enthralled until you reach Nefertiti’s place of rest – where you as the Raider may carry home the riches of the ancient Egyptian Queen, thanks to the unlimited increasing win multiplier.”

Nolimit is a Stockholm and Malta-based software provider that produces some of the highest quality slot games for various platforms. With most of the work done in-house, this company is capable of delivering complete solutions to their clients worldwide. This one-stop-shop support has made it a trusted partner for various operators. In fact, its list of partners includes some of the highest-rated operators in various markets.

Aside from making quality slots, this company takes pride in being at the very edge of technological advances in the iGaming niche.