Nolimit City Goes Interstellar with the Release of Milky Ways 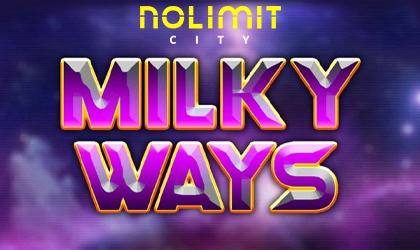 Nolimit City is heading for the stars in their latest slot game – Milky Ways.

…our galaxy. Fans of space-themed slots will arguably feel right at home with this release. On top of cool aesthetics, the game also features a rocking theme.

Namely, as soon as players load up the game, they will find themselves at the edge of a massive black hole that…

…is threatening to swallow the whole scene. One quick glance around it reveals plenty of objects caught in its event horizon. By the looks of it, the reels could be next! Speaking of the reels, this game offers an interesting combination of icons for the lower-paying and higher-paying tier.

The team behind the supplier went with stylish and for some reason very neon card royals in the lower-paying tier. On the other hand, the higher paying tier is populated with gems. Needless to say, this combination is fairly unusual.

Looks alone aren’t what makes this game so great. The team at has ensured that it’s also packed with interesting features!

The 5x3 slot uses the 243-3125 ways to win mechanic. The base game alone is potent enough to bring all kinds of prizes.

That being said, players can look forward…

…to several special features that spice things up considerably. More specifically, there are two bonus spin modes that can be accessed.

The Milky Ways Spins are triggered by collecting three symbols of the same name.

Once that happens, the…

The Fusion Spins mode locks winning symbols, having them appear for the next spin. Last but not least, there are also multiplier wilds available.

Per Lindheimer, Product Owner at Nolimit has shared a comment regarding the newly released title: “Milky Ways combines classic gems with contemporary features that deliver a straight forward gameplay that make the lucky ones screaming so loud from the excitement that it can be heard down to Earth.”

The world of iGaming is held together by a number of top tier providers and operators. Nolimit is one such example. This company offers high-quality content to a wide range of clients all over the world. Its team consists of talented professionals whose knack for innovation isn’t easily matched in the industry.