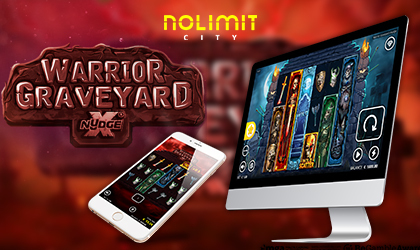 Celebrating Halloween Eve, Nolimit City has decided to continue the fall celebration and stick to the theme, delivering an amazing experience with its latest slot game. It welcomes the return of the barbarians with the Warrior Graveyard xNudge slot. With yet another game with exclusive xNudge mechanics, the studio behind beloved classics such as Barbarian Fury, Tombstone and Deadwood continues its everlasting quest to provide some of the most immersive games that deliver the ultimate entertainment.

Into the Amusing Game Atmosphere:

Players can expect stacked xNudge wilds and premium symbols. The Death Spins feature brings the maximum payouts up to 9,797x the bet. This slot adventure is exciting with a claustrophobic soundtrack which makes the atmosphere really scary. However, the betting range is not claustrophobic and players have at their disposal a pretty wide range which starts from $0.25 up to $125. The action takes place on 6x3 grid with 25 active paylines. The RTP is 96.15% which is slightly above-average.

The key feature is the stacked xNudge Tombstone Wild, which can appear on reels 2, 3, 4, and 5. Besides xNudge Wilds, players also have a Warrior Attack feature. If 3 of the identical bonus symbols appear anywhere on the reels, they will behave the same way as wild symbols.

“It’s not a game with sleeping beauties, but raising the dead has never been as beautiful as in Warrior Graveyard. The xNudge mechanic really comes into fruition in this slot and creates heart raising moments, especially in the bonus modes. Any player that have played our games previously will feel right at home with Warrior Graveyard.”

They have been in the online casino gaming industry for over ten years and they have several interesting games under their belt. Some of the exciting editions from the brand’s slots include Thor: Hammer Time and Tractor Beam. They offer usually a higher RTP, which gives players quite often wins during gaming rounds, and this criteria is a very important factor to the punters these days.

This game provider is originally from Sweden, but their offices are in Malta. They have partnerships deals with several well-known operators, which indicates that they already enjoy a good reputation.