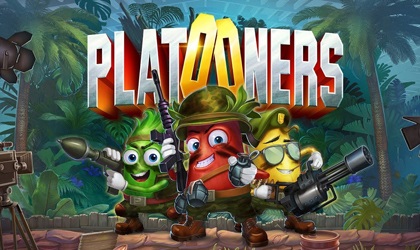 ELK Studios is one of the freshest software producers out there, having dropped titles like Taco Brothers and Lakes Five. They don’t release a title every month, deeming quality product and play way too important for that. When they do release their titles, you can be sure that the games are unique and extremely well done. Such is the case with their newest video slot, Platooners.

Here your mission is to try and take control of the three platooners, who spend most of their time and energy firing different guns. Whether or not they are even fighting anyone is up for speculation. Their mission at least is to finish filming a movie, though they are far too entertained by the action to let the reels stop rolling.

The theme of the game mixes a lot of influences from different sources: a previous game titled Bloopers, the movie Platoon as well as Tropic Thunder, plus age-old computer games such as Cannon Fodder, are quite evident sources of inspiration. As you can tell, the company really does put work into their titles. Jump in now and you can grab plenty of attractive bonuses. The game comes with plenty of explosive special features, wilds, free spins, scatters and the usual big wins. Check out the game and win up to 2500 times your bet on a single spin!

FunFair Games takes players to the future with CyberHunter 2080