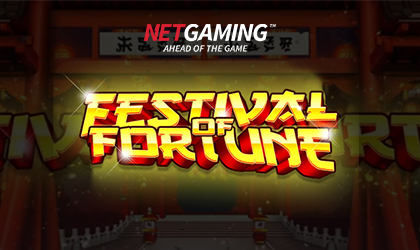 The game is the latest the Far East-inspired…

…slot to hit the market this year. The developer has packed this title with great features and more, all of which are promising solid entertainment for those who decide to try this game.

Fortune from the Far East:

The new game is the latest slot to be added to the Far Eastern niche. As is the case with most games from this category, the new offering is pretty conservative when it comes to theme design. This slot takes place in a traditional Chinese temple that features bright red pillars lining up both sides of the reels.

The background is simply packed with…

…all kinds of details that are often associated with traditional Chinese architecture. To make things even better, the creative team behind this release had also animated the lanterns and several other details in the background.

Symbol design is similar. Players can look forward to tastefully designed card royals in the lower-paying set, while the higher paying set is more distinctive. These more valuable symbols are all about lanterns, dragons, firecrackers and many other motifs that are associated with Chinese festivities.

The title runs on a standard 5x3 reel grid and 15 paylines. With that said, the company didn’t go too wild with special features. Instead, they’ve decided to offer a standard bonus spin mode and the Mystery Replace feature. The latter is capable of allowing up to 27 additional bonus spins to players lucky enough to trigger this feature. Festival of Fortune is considered a highly volatile release with an estimated RTP of 95.93%.

Pallavi Deshmukh, CEO at NetGaming, had the following words to say: “Festival of Fortune is an action-packed entertainment experience, boasting immersive symbols, exciting bonus rounds, and an engaging theme. Following a hugely successful ICE, NetGaming is continuing to produce premium quality content as we look to build on our international expansion.”

NetGaming is a software development studio that operates from the UK, Malta, and India. Formed by a gaming entrepreneur who recognized areas where the iGaming industry could be improved, and a group of industry veterans, it grew to become a prosperous provider. The team that is driving this brand forward is all about uncompromised quality and offering its end users great gaming experience.

Such an approach to game creation has allowed this company to establish a large distribution network that includes some of the top operators in the industry. The supplier is working on improving their games even further, offering innovation and advanced mathematical models.